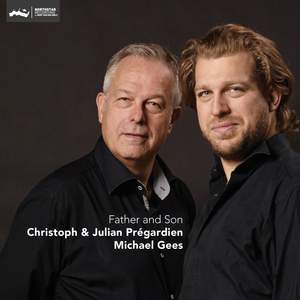 a real treasure...What makes this anthology so enriching is the skill of their arrangements...The two tenors of father and son - shared DNA, complementary tints and timbres - blend with grace... — BBC Music Magazine, Awards Issue 2015, 5 out of 5 stars More…

Brahms: In stiller Nacht (No. 42 from Deutsche Volkslieder, WoO 33)

‘Father and Son’ is an exciting project that features the great tenor and lieder specialist Christoph Prégardien and his son Julian performing arrangements for two voices and piano of songs by Franz Schubert, Robert Schumann, Friedrich Silcher, and Johannes Brahms.

The featured pianist is a regular accompanist of Christoph Prégardien, Michael Gees. This Hybrid SACD also includes five songs by the early 20th century German composer Herrman Zilcher written specifically for two tenors, in this case accompanied by a pair of harmonica players. Based on the reminiscences of Franz Schubert’s life noted down by Moritz von Schwind, it is possible to imagine that Schubert the composer may have sometimes intended the use of two voices with the same range to perform his songs either singing alternatively or in unison. This semi-improvisational approach did not find its way into the published works and has been largely forgotten, but it forms the basis of this ground-breaking album featuring the father and son combination of Christoph and Julian Prégardien. Alongside the twelve Schubert lieder presented here, the Prégardiens have chosen a selection of songs by Robert Schumann and a contemporary of his, Friedrich Silcher, as well as four works by Brahms, and these have all been arranged for two voices by the artists along similar lines. Also included are five lieder for two tenors and two harmonicas by the 20th century composer Herrmann Zilcher.

a real treasure...What makes this anthology so enriching is the skill of their arrangements...The two tenors of father and son - shared DNA, complementary tints and timbres - blend with grace and glee. The Zilcher duets for two voices and two harmonicas have to be heard to be believed.

Both tenors display family traits of appealing mellifluousness and impeccable musicality. Together they communicate a sense of something homely, of improvisation and of singing for pure enjoyment...Gees, himself responsible for some of the arrangements, contributes excellent accompaniment throughout.