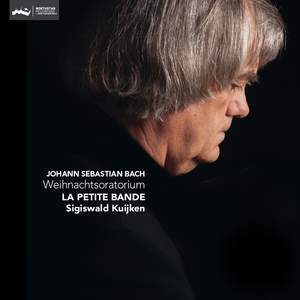 Listeners may be surprised by the spare, transparent textures of this new version...An exquisite lightness pervades: rhythms lilt and dance, intricate passagework sounds fleet and agile, and... — BBC Music Magazine, April 2015, 5 out of 5 stars More…

With this recording of the Weinachtsoratorium (Christmas Oratorio) the highly regarded early music specialist Sigiswald Kuijken and the group La Petite Bande have now recorded all of J.S. Bach’s great Oratorios in the scaled-down “one to a part” form. The featured vocalists here are the soprano Sunhae Im, the mezzo Petra Noskaiova, the tenor Stephan Scherpe, and the baritone Jan van der Crabben.

J.S. Bach’s Christmas Oratorio is a series of 6 separate smaller cantatas, collectively relating the story of Jesus from Christmas through to Twelfth Night. Bach wrote the work in Leipzig in 1734 and 1735. The performance presented here by Sigiswald Kuijken and La Petite Bande is perhaps as close as presently possible to what we imagine Bach might have had in mind as he composed the work. Historical research among the various sources clearly shows that Bach did not ask for a choir to perform his cantatas, but simply a vocal quartet. Bach also employed a small-scale string ensemble, comprising of two first violins, two second violins, one viola, one or two bass violins for the bass line and sometimes a violoncello da spalla, or shoulder cello, as well as single wind instruments where appropriate. This is all supported by an organ, which in conjunction with the bass violin acts as continuo.

The Belgian violinist, violist, and conductor Sigiswald Kuijken was seven when he first came into contact with the Renaissance instruments. Like his brother Wieland, he is self-taught on the viola da gamba. In 1969 he began to re-establish the old technique of violin playing, without using a chin or a shoulder rest. In 1972 he formed the Baroque Ensemble La Petite Bande with whom he has recorded music by Lully, Rameau, J.S. Bach, George Frideric Handel, Gluck, Haydn, Mozart and many others. He has made several previous recordings for Challenge Classics including J.S.Bach’s Mass in B minor (CC72316), and St Matthew and St John Passions (CC72357 and CC723545).

Listeners may be surprised by the spare, transparent textures of this new version...An exquisite lightness pervades: rhythms lilt and dance, intricate passagework sounds fleet and agile, and the text is cleanly articulated even within complex contrapuntal textures...the singing at times [is] instrumental in quality and a far cry from the quasi-operatic displays of some recordings.

This reading of the Christmas Oratorio exhibits many of Kuijken's most compelling qualities with his quietly authoritative, steady and organic understanding...The understand what underpins Kuijken's serious approach to Bach is to be reminded that his pioneering historical instincts are increasingly left to speak for themselves. The arias are often outstanding.