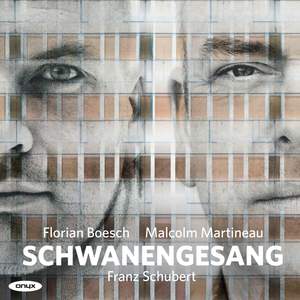 To complete their survey of the Schubert Song Cycles, Boesch & Martineau arrive at Schwanengesang, the set of 13 songs composed in 1828. These are masterly settings of Rellstab and Heine, and finds Schubert at the very peak of his lieder-composing prowess. An additional song 'Die Taubenpost' D956a to words by Seidl was included by the publisher but this recording excludes the song. It does however include five Goethe settings dating from 1815 - 1821. Florian Boesch is in glorious voice, often almost introverted and intimate, but gloriously even throughout his range.

Boesch is a wonderful Schubert singer...the range of his full, rounded bass-baritone voice, always in tune, is remarkable.

[Boesch] has a very wide dynamic range at his disposal which he controls expertly while his palette of vocal colouring is wide ranging and applied with perception. Clearly he has established a formidable partnership with Malcolm Martineau...Here is an extremely accomplished and perceptive Schubertian.

The young Austrian baritone...is one of the current It boys of German Lieder...Boesch may not have the most alluring of contemporary baritone sounds, but his savour of the text and thoughtful, undemonstrative style bring their own rewards. Martineau’s playing could hardly be bettered.

Boesch perfectly captures the resigned strength of the late masterpieces.