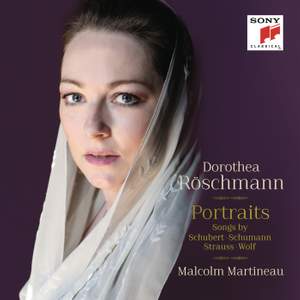 this recital...represents the finest singing I have encountered from her...Röschmann's slightly mottled soprano may not have an ideally wide coloristic range, but it's remarkable how much variety... — BBC Music Magazine, Awards Issue 2015, 5 out of 5 stars More…

Dorothea Röschmann releases her new recital album including well known songs by Schubert, Schumann, Strauss and Wolf. She is accompanied by Malcolm Martineau who is recognized as one of the leading accompanists of his generation.

"The idea for this program of female portraits took seed a long time ago, when I was studying in London with the wonderful teacher, Vera Rozsa. I used to make frequent pilgrimages to the extraordinary National Portrait Gallery where one is surrounded by the most imposing portraits of British personalities and royalty, such as the Tudors and Queen Elizabeth I, as well as countless figures from British history – poets, physicians and so on - all concentrated and condensed within the confines of the building.

A portrait represents a very intense encounter with a person and you believe you know them better after having studied the picture for some time. It can only give you a glimpse of the personality, but also creates an impression of how the person wanted to be portrayed. In songs, a portrait is the musical interpretation of a fictionalized person from literature (Gretchen, Mignon), or real life (Mary Stuart), but the process of character portrayal and trying to get deeper and deeper through different layers, has to happen musically. As a portrait, it can only attempt to portray a snapshot of all the emotions of the character but the longer you live with a song, the more you find in it, as in all music.

This fascination with character interpretation in song and in opera, led to my desire to put together a programme with portraits that reflect the finely shaded nuances of the figures presented here. In the same way, female characters such as Mignon and Gretchen, created by Goethe, and Mary, Queen of Scots, have stimulated the imagination of poets, composers and artists alike. We have included songs by Richard Strauss as every one of them can be regarded as a miniature mood portrait.

The original Schubert setting of ‘Gretchens Bitte’ is only a fragment of Goethe’s poem so we have chosen Benjamin Britten’s ‘complete’ version as it gives a more comprehensive characterization of Gretchen." Dorothea Röschmann.

this recital...represents the finest singing I have encountered from her...Röschmann's slightly mottled soprano may not have an ideally wide coloristic range, but it's remarkable how much variety of tone and timbre she brings to this programme. These are considered interpretations, living out of the spirit of the texts and the music with outstanding insight and precision.

Her soprano has taken on a darker sound of late...Röschmann is highly skilled in Lieder and her partnership with Malcolm Martineau has delivered a recital that gets beneath the music's skin.