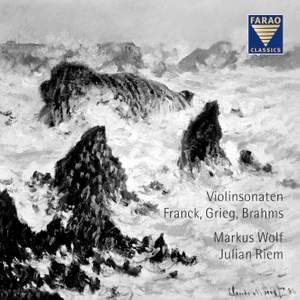 Violin Sonata in A Major, FWV 8: I. Allegretto ben moderato

In the summer of 1886, Johannes Brahms began work on composing his third violin sonata. Its first performance took place in 1888 with Brahms himself at the piano and Jenö Hubay on the violin. Brahms dedicated this sonata, tinged with Magyar melancholy, to his friend, the pianist and conductor Hans von Bülow, and the piano indeed plays a major role throughout almost the entire work.

Norwegian national folklore pervades Edvard Grieg's third violin sonata. Begun in 1885, it was given its final form two years later and was premièred in 1887 in Leipzig by the Russian violin virtuoso Adolph Brodsky and Grieg at the piano. The sonata is dedicated to Franz von Lenbach in return for two portraits he made of Nina and Edvard Grieg.

César Franck's sole violin sonata was composed in 1886, a virtuoso work full of passion, subtlety and harmonic and melodic inspiration. It is dedicated to one of the most famous violinists of the time, Eugène Ysaÿe, and was presented to him for his wedding in September 1886.

Three fascinating, high Romantic jewels that have become an indispensable part of the violin repertoire. On this recording, particular care has been taken to come as close as possible to the sound and emotional expression of the time during which they were written. Instead of modern instruments, a historical Bechstein grand piano from 1862 and the Vollrath Stradivarius from 1722, played with a bow by Jean Pierre Marie Persoit from c. 1820, were used.

The characteristics of the historical piano mechanism, the different gauge of the strings and the lack of the steel frame used in modern instruments confront the pianist in particular with great challenges. But all of this leads to a completely different sound and allows surprising new insights into the compositions.

The highly romantic approach of Markus Wolf on the violin rounds off the unique and innovative character of this recording.

Born in Munich in 1973, Julian Riem studied in Munich, Paris and finally in Basel under Rudolf Buchbinder. He has won several international piano competitions. He regularly gives concerts in Europe, Japan and the USA as a soloist, chamber-music performer and Lied accompanist. He plays in the Velit Quartett and the Munich Horn Trio, which was given an 'Echo Klassik' award for the best chamber-music recording in 2012. Since 1999 he has taught at the universities of music in Munich and Augsburg.