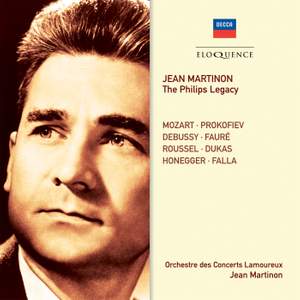 5. The Prince and the Princess

Jean Martinon’s career in the recording studio got under way after World War II when, in 1947–48, he and the London Philharmonic Orchestra when he recorded music by Mozart, Ravel, Tchaikovsky and Chabrier. Between then and April 1960 he recorded extensively for Decca. Brilliant as many of these recordings are, they have completely overshadowed the parallel legacy of the recordings Martinon made for Philips between 1953 and 1956.

From 1951 to 1957 Martinon was principal conductor with the Orchestre des Concerts Lamoureux, an outfit that at the time ranked as one of the best in France, alongside the Orchestre national de la Radiodiffusion française, and as is demonstrated by the different musical landscapes traversed in the Philips sessions, he made his mark in a wide variety of repertoire.

The revelation of his versions of three Mozart symphonies, Nos. 31–33, made in the composer’s bicentenary year of 1956 for Philips’s French operation and completely neglected until this release, makes a lasting impression. Martinon here is literally glowing, breathing the music with disarming ease, just as in Haydn. He unerringly grasps all the visceral energy and inherent hedonism of the works, and he conveys its late-eighteenth century theatrical leanings and sunny lyricism.

Martinon had a passion for Russian music, here represented by his recording of the suite from The Love of Three Oranges (‘like a bolt of electricity’ Pierre-Yves Lascar) and a fizzing account of the composer’s ‘Classical’ Symphony.

He had already established a formidable reputation as a seasoned interpreter of French music in the 1950s, and this part of the repertoire occupies a select place in this retrospective of his Philips recordings. Devotees of the stereo versions that appeared on Erato will be astonished by his first Roussel recordings (the suite from Le Festin de l’araignée on 9 and 11 February 1953, and Bacchus et Ariane on 4 and 5 October 1954).

Spontaneity and enthusiasm, warmth and fluidity are equally the characteristics that emerge from a hearing of the four other great pieces of French music in this anthology: Debussy’s Prélude à l’après-midi d’un faune, Dukas’s L’Apprenti sorcier, Fauré’s Pavane and Honegger’s Pastorale d’été.

It was as the head of the Orchestre des Concerts Lamoureux that Martinon completed his official exploration of the works of Falla in 1955. He never returned to the composer’s music again in the recording studio. He had a passion for this music and the microphones of the Salle Apollo in Paris caught his impassioned account of Nights in the Gardens of Spain with the Saragossa-born pianist Eduardo del Pueyo, followed by a fiery El amor brujo.

Issued as a companion set is Martinon’s Deutsche Grammophon legacy (480 8926) including collaborations with Pierre Fournier and Nicanor Zabaleta (with the first release on CD of Ginastera’s Harp Concerto) and Martinon’s own Second Violin Concerto.

ALL FIRST RELEASES ON CD except Falla: Nights in the Gardens of Spain.

[His] Mozart is stylish, Falla exciting...yet best of all is his Roussel...full of freshness or virtuosity.