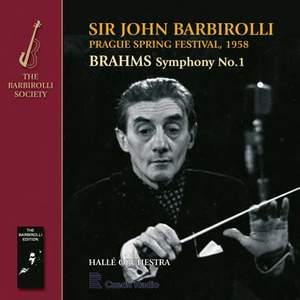 Listen blind, and you'd think this is the Vienna Phil: Barbirolli's Hallé is on fire in these near-fabulous performances in the Smetana Hall, with wonderful horn and flute solos. — BBC Music Magazine, Christmas 2014,

In 1958 Sir John Barbirolli and the Hallé had been invited to the Prague Spring Festival and their first Prague concert, in the acoustically admirable Smetana Hall given on 24 May, was of Berlioz’s Roman Carnival overture, Elgar’s Enigma Variations and Bruckner’s Fourth Symphony. The following evening (the performances on this CD) the programme opened with a Weber’s Oberon overture followed by Vaughan Williams’s Eighth Symphony and the concert concluded with Brahms’s First Symphony.

It is a source of considerable interest and gratitude that Czech Radio has retained the original tapes of the Weber and Brahms works, and has kindly made them available for release by the Barbirolli Society – the interest being that this is a very rare surviving performance of Brahms’s C minor Symphony under Barbirolli’s baton – for there are only two other known recordings (either live or commercially taped) of the Symphony conducted by him. Whatever the combination of circumstances which led to this dearth of surviving interpretations, we should be thankful to the Czech engineers for capturing such a musically rare event.

The performances are remarkable for their intensity and structural cohesion, and, in the Weber overture, for the character and delicacy of the individual playing where called for. The spontaneous and enthusiastic ovation following each work here by the Czech audience demonstrated the truth of the comment by an observer at the time, who noted that at the conclusion of the Symphony, ‘Barbirolli had the audience eating out of the palm of his hand’.

The recordings are from the archives of Czech Radio and are published here for the first time.

Listen blind, and you'd think this is the Vienna Phil: Barbirolli's Hallé is on fire in these near-fabulous performances in the Smetana Hall, with wonderful horn and flute solos.