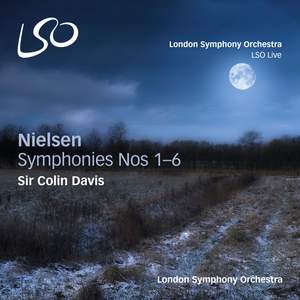 Sir Colin Davis’s set with the London Symphony Orchestra is very fine as you might expect… There are plenty of excellent sounds to be experienced here. — MusicWeb International More…

These recordings, made during Sir Colin Davis’ ‘Indian summer’ with the orchestra, are acknowledged to be amongst the finest recordings ever made of this repertoire, receiving numerous awards. The symphonies were originally released between 2011 and 2013 and will now be made available together for the first time as a beautifully packaged 3 SACD box set, including one Pure Audio Blu-ray disc.

Despite giving titles to the majority of his symphonies, Danish composer Carl Nielsen was often vague about what influenced each work. Nevertheless he was a master symphonist and his music is mesmerising, combining propulsive energy with lyrical invention.

Sir Colin Davis’s set with the London Symphony Orchestra is very fine as you might expect… There are plenty of excellent sounds to be experienced here.

Late in his career, Sir Colin Davis discovered Nielsen...This set of live recordings is the legacy. The last one played, the powerfully affirmative Sinfonia Espansiva (No 3), brought the cycle to a thrilling conclusion...He and the orchestra give passionate accounts of all six.

Force and rhythmic energy are among the trademarks of Nielsen's symphonies. This is clearly evident in the concert recordings under the direction of Colin Davis…A great discovery, thanks to Colin Davis and the excellent London Symphony Orchestra.