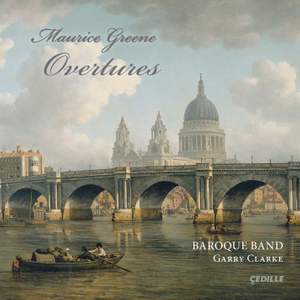 Greene, M: A Collection of Lessons: Pieces in A minor

Greene, M: A Collection of Lessons: Pieces in C minor

Greene, M: A Collection of Lessons: Pieces in G minor

British-born Baroque violinist and conductor Garry Clarke and his Baroque Band, Chicago’s period-instrument orchestra, highlight unfamiliar and thoroughly enjoyable orchestral overtures by 18th-century English composer Maurice Greene, who is otherwise best-remembered for his choral music.In its biography of the composer, Grove Music Online goes so far as to say that Greene’s music, “generally buoyant and attractively tuneful, is thus more elegant and polished than that of almost all of his immediate predecessors and contemporaries.”

For its second and newest Cedille recording, the “stylish and exciting” (Chicago Tribune) ensemble has selected a program of delightful works with what Clarke calls “whistle-able melodies, easy harmony, and inventive counterpoint” that evoke “the charm of the English countryside and the frivolity of the English 18th century.” Selections from Greene’s “Lessons for the Harpsichord,” performed by ensemble member (and longtime Cedille solo keyboard artist) David Schrader, offer similar pleasures.

Baroque Band made its Cedille label debut with Biber: Mensa Sonora. Strings magazine said, “The players are excellent.” The Toronto Star described the interpretations “extra-rich and satisfying.” Classical Candor called the ensemble “a welcome addition to America's elite period-instruments crowd.” The album was featured nationwide on public radio’s “Sunday Baroque” and “Harmonia Early Music” programs, and was heard on many local broadcasts as well.