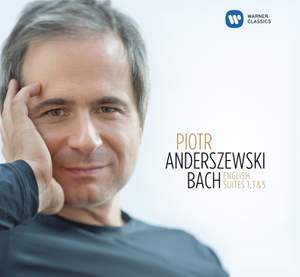 He dispenses tantalising apercus with a touch that delights in nuanced voicing of the most rarefied expressiveness...He oxygenates everything he touches...For anyone who loves Bach (or the piano),... — BBC Music Magazine, March 2015, 5 out of 5 stars More…

“The wonderful thing is that the modern piano can suggest so many instruments…Playing Bach on the piano, it’s really all about suggestion,” says Piotr Anderszewski. More than 10 years since the release of his first recording of Bach’s English Suites, these interpretations of Suites 1, 3 and 5 join the Warner Classics catalogue. Anderszewski’s concert performances of Bach in 2013 prompted the New York Times to write: “He revels in the full range of timbres afforded by the modern piano”, while The Guardian cited “some of the most sublime piano playing London has witnessed all season”.

With this recording, Piotr Anderszewski returns to Bach’s English Suites after more than 10 years. In 2002, when Virgin Classics (now Warner Classics/Erato) released his interpretations of Suites 1, 3 and 6, The Sunday Times spoke of “Bach playing of the highest order,” enthusing that: “His playing throughout is wonderful, laying out Bach’s contrapuntal writing with a clarity and subtlety of touch that removes these works far from the realms of technical exercises. His fingers dance in the Courantes and Allemandes, and positively sing the melodies of the sublime Sarabandes.”

The English Suites featured prominently in Anderszewski’s concert schedule for 2012/13. His performance at Carnegie Hall prompted the New York Times to observe that “his Bach recital was characterized by unabashedly personal interpretations that he delivered with persuasive intensity ... He revels in the full range of timbres afforded by the modern piano and often uses the sustaining pedal to allow notes to pool together like watercolors...Mr. Anderszewski’s interest seems to lie less in the structure of Bach’s counterpoint than in the individual moments of drama it affords. That the results are never indulgent is due above all to his deep musicality and psychologically astute instinct ... Any pianist can bring out the playfulness of the second Gavotte in the English Suite No. 3, but Mr. Anderszewski added a layer of hushed melancholy that suggested the playfulness of one accustomed to being alone. Each movement was vividly drawn. There was a shy Courante, a bustling Sarabande, a haltingly curious Gavotte, a sociable and chatty Prelude. The Sarabande of the English Suite No. 3 began with a succession of chords that evoked proud Spanish guitars but then gradually darkened, ending on a note of bitter loneliness.”

After his Spring 2013 concert at London’s Southbank Centre, The Guardian spoke of “some of the most sublime piano playing London has witnessed all season. Anderszewski's manner reflects the intensity of his relationship with each note and phrase. He appears less to perform existing repertoire than rebuild each piece from scratch, holding everything spontaneously in balance ... His physical relationship with the piano...yields a control over tone and structure, touch and phrasing, which few pianists can equal.”

La Tribune de Genève, meanwhile, waxed lyrical: “Piotr Anderszewski is in contact with other worlds, because he searches for each note in the depth of his own world. The voices that traverse it and that he evokes cannot be ignored. They are not there to charm, but to perturb...they surprise and shake us. They make us marvel, overwhelm us...Bach’s voice sings everywhere, in every finger. It is an outpouring of song, an endless discussion between voices that call to each other, answer each other and contradict each other, each with its own timbre, character, articulation and rhythm...The whole vibrates with a supernatural light and resonates like a choir or an orchestra.”

He dispenses tantalising apercus with a touch that delights in nuanced voicing of the most rarefied expressiveness...He oxygenates everything he touches...For anyone who loves Bach (or the piano), with even the more contentious moments proving dangerously seductive, this life-enhancing disc is required listening.

This is a glorious disc. Simply glorious...To start with, there's the sense of sharing the sheer physical thrill of Bach's keyboard-writing....And at every turn, he harnesses the possibilities of the piano in the service of Bach; the result is a clear labour of love...Anderszewski's CDs are all too infrequent, so let's cherish this one.

There’s both carefully focused energy and reflective poise here...Anderszewski manages to be punctiliously stylish without ever becoming precious, refreshingly matter-of-fact without being routine.

Anderszewski’s Bach has long been in a class of its own – stylish, imaginative, virile and invigorating...Here again in his three English Suites he knows exactly how to make the music speak...and he shares with Bach a jubilant spirit in crafting music of infinite fascination, refinement and sublime inspiration.