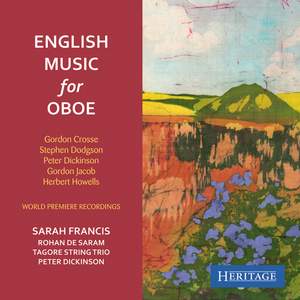 Heritage is proud to announce the release of Sarah Francis’ final solo recording – English music for oboe which has a personal association. At the heart of this release is the Howells Oboe Sonata. Although written for Leon Goossens, Sarah was the first oboist to perform and record the work. It appears here under licence from Hyperion. This is coupled with works for differing forces which were written for Sarah by leading 20th century English composers. Three world premiere recordings are included.

Sarah Francis started her career as principal oboe in the then BBC Welsh Orchestra. She has broadcast regularly for the BBC since the age of 19 in recitals and concerto performances, including the Proms where she premiered 'Ariadne', the concerto composed for her by Gordon Crosse.

Her first solo recording was of Britten's 'Six Metamorphoses after Ovid', which Britten invited her to play at the Aldeburgh Festival and which she has now recorded commercially three times. Her solo recordings for Decca, Hyperion, Chandos, Unicorn-Kanchana (now available on the Heritage label) and Naxos include the oboe concertos of Albinoni, Handel, Telemann, Krommer and Mozart and 20th century British repertoire by Bax, Britten, Holst, Jacob, Alwyn and Rubbra. Major works dedicated to Sarah Francis include concertos by Gordon Crosse, William Mathias and Anthony Payne. She is a Fellow of the Royal College of Music.

the present collection takes a well-earned place among the long list of Sarah Francis's previous recordings.

I couldn’t be more enthusiastic about the playing. Sarah Francis and her colleagues are just magnificent.

The mellifluousness and sheer musicality of Francis’s playing make this sequence of five works, all but one written for her, a particular pleasure.