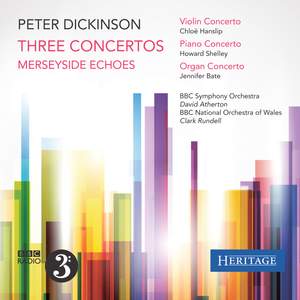 Peter Dickinson's three concertos delight in playfulness, and imaginative use of Americana and Beethoven. The Violin Concerto is a premiere recording. — BBC Music Magazine, January 2015, 4 out of 5 stars More…

Heritage presents a brand new recording of a British Violin Concerto. Chloe Hanslip gives the world premiere recording of Peter Dickinson’s Violin Concerto, accompanied by the BBC National Orchestra of Wales and conducted by Clark Rundell. This release marks the 80th birthday of Peter Dickinson. The performance is coupled with recordings of the Piano Concerto (Howard Shelley) and Organ Concerto (Jennifer Bate), both works accompanied by the BBC Symphony Orchestra, conducted by David Atherton. Also included is the world premiere recording of Merseyside Echoes, Dickinson’s light-hearted tribute to The Beatles. The concertos form the core of Dickinson’s output and are a summary of his approach to the three solo instruments. All are in a concentrated single movement where the soloists are almost constantly involved, as in a large chamber work.

Peter Dickinson's three concertos delight in playfulness, and imaginative use of Americana and Beethoven. The Violin Concerto is a premiere recording.

these three concertos exemplify the resourceful and subtle interplay between 'popular' and 'art' music which has long been central to his thinking...Bate gives an assured reading, as does Howard Shelley of the Piano Concerto...Detailed notes from the composer further enhance this absorbing and highly recommendable release.

These works display Dickinson’s ability to write music that is at the same time approachable and challenging. His ability to fuse diverse musical styles is masterly. This is a fitting 80th birthday tribute to a great composer, performer, teacher and writer.

With a keen ear for sonority, and not one to miss a trick theatrically, Dickinson’s concertos show the composer at his most imaginative.