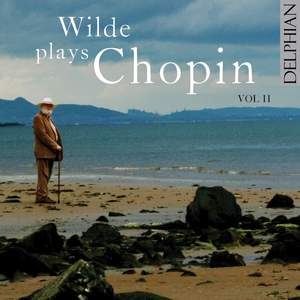 Wilde offers a determined attack on conventional wisdom...an epic, gnarled and rugged genius shaking his fist at the universe with all the defiance of King Lear...Some may accuse him of assault... — Gramophone Magazine, November 2014 More…

David Wilde made his first Delphian appearance in a recital of Chopin’s music recorded live at the Wigmore Hall. Seven recordings and 12 years later, immediately following the death of his wife Jane, David stopped work on a disc of recently written British piano sonatas and turned his attentions to this second Chopin programme in memory of Jane.

In his 80th year, David’s breathtaking virtuosity and towering intellect combine in interpretations informed by a long lifetime of study and performance. And in this music, which has been central to his musical life, David’s performances revel in Chopin’s extremes. This is after all the composer who is reported to have said to a pupil: "If I had your strength and could play that Polonaise as it should be played, there would be no string left unbroken by the time I had finished!".

Wilde’s Chopin is not for the timid: these are performances fuelled by passion, performances that combine heartfelt tenderness with deep personal grief.

Pianist and composer David Wilde was born in Manchester in 1935. A student of the legendary pianist Solomon, Franz Reizenstein, and Nadia Boulanger, Wilde won a first prize at the Liszt– Bartók competition in Budapest in 1961. He now records exclusively for Delphian Records for whom he has recorded the following: a first Chopin recital (DCD34010), the complete piano works of Luigi Dallapiccola (DCD34020), a highly acclaimed Liszt Sonata coupled with the seven Elegies of Busoni (DCD34030), a Schumann recital (DCD34050), a Brahms recital (DCD34040) and a Beethoven recital (DCD34090). His most recent disc is 'Wilde plays Liszt' (DCD34118).

Wilde offers a determined attack on conventional wisdom...an epic, gnarled and rugged genius shaking his fist at the universe with all the defiance of King Lear...Some may accuse him of assault and battery but others will surely pause to think again about Chopin's stature. Delphian's sound is crystal-clear and beyond reproach.

[Wilde] is not just at home in Chopin’s music. It is part of his nature, seemingly as necessary and inevitable as breathing...The soundscape summoned by his imagination is vast, craggy, monumental, inexorable. His music making speaks directly of life, of love, and of loss, always with unmistakable wisdom and dignity.

This is the most intense, idiosyncratic, personal Chopin recital to be recorded in years. Always-interesting, pianist David Wilde recorded it at age 80, shortly after the death of his wife Jane...Chopin this weird and personal will always create enemies [but] I, for one, have listened to this album in shock, admiration, fascination, and deepest respect.