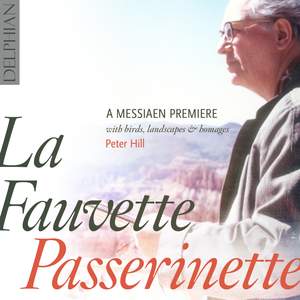 A Messiaen premiere with birds, landscapes and homages

Hill places the new work within an exceptionally well-crafted recital in which Messiaen's music is a recurrent thread in a span of resonances, influences and affinities...Whether in Dutilleux... — BBC Music Magazine, December 2014, 5 out of 5 stars More…

3 Studies: No. 1. Fantasy on Iambic Rhythm

In 2012, leading pianist and Messiaen scholar Peter Hill made a remarkable discovery among the composer’s papers: several pages of tightly written manuscript from 1961, constituting a near-complete and hitherto unknown work for piano. Hill was able to fill in some missing dynamics and articulations by consulting Messiaen’s birdsong notebooks, and gave the work’s first public performance in the autumn of 2013.

Here, then, he follows his acclaimed Bach recordings for Delphian with a return to the music in which he first made his reputation, setting this glittering addition to Messiaen’s piano output in the context both of the composer’s own earlier work and of music by the many younger composers on whom Messiaen was a profound influence – from Stockhausen and Takemitsu to George Benjamin, who like Hill himself worked closely with the composer in the years before his death.

One of the leading British pianists of his generation, Peter Hill worked with Messiaen between 1986 and 1991 while recording the composer’s complete piano works. The series was described by the New York Times as "one of the most impressive solo recording projects of recent years", and won Messiaen’s endorsement: "Beautiful technique, a true poet: I am a passionate admirer of Peter Hill’s playing." His research on Messiaen continues and a book on 'Catalogue d’oiseaux' is in preparation.

Hill’s recordings for Delphian of Bach’s 'The Well-Tempered Clavier' – two volumes, each comprising 2 CDs – have received outstanding reviews: Book 2 (Delphian DCD34101) was CD of the Week on BBC Radio 3.

Hill places the new work within an exceptionally well-crafted recital in which Messiaen's music is a recurrent thread in a span of resonances, influences and affinities...Whether in Dutilleux or Peter Sculthorpe, Murail or Takemitsu, Hill's provides a masterclass in capturing a composer's idiom with warmth and humanity.

he knows how to make a sound like bronze, like those pianists from before the first world war. There it is: you’re hooked … the depth of his sound, the kaleidoscope of attacks, the intelligence of the pedalling are unfailing.

Hill's realisation forms a rewarding substantial centrepiece to this outstanding recital disc. The whole point is to put Messiaen himself in a stimulating context...The appeal of the disc is greatly enhanced by the exceptional quality of the recording, with every facet of Hill's uncompromisingly extensive expressive range vividly captured.

this generously filled disc [is] a serious study for both concentrated and extended reading.

With a beautiful recorded balance equally capturing the subtle colours and drama of both the music and Peter Hill’s performances, this is both a piano recording of demonstration quality and a musical experience to treasure.

Hill has devised a fascinating sequence to contextualise this first recording of an 11-minute virtuoso piece he discovered in Messiaen’s posthumous papers...as performed here, [it] is bitingly fresh and chattery, plausibly ornithological.

What a discovery! La Fauvette Passerinette is a stunning 11-minute piano solo — joyous, syncopated and virtuosic...It was rediscovered recently by Peter Hill, who sends its birdsong-based fantasies soaring fabulously on a fascinating disc that puts the French maître in the context of contemporaries...and pupils.