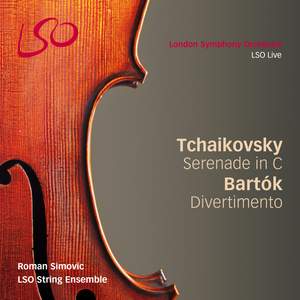 [Simovic] encourages a soaring cantabile reminiscent of Herbert von Karajan's early 1980s take [on the Serenade] with the Berlin Phil, but without the German's sheer heft...If the Tchaikovsky... — BBC Music Magazine, Awards Issue 2015, 4 out of 5 stars More…

The LSO’s magnificent string sound is world renowned and this recording marks the LSO Live debut of the LSO String Ensemble, led by LSO Leader Roman Simovic, who directs a performance of the much loved Tchaikovsky 'Serenade for Strings', together with Bartók’s 'Divertimento'.

The Serenade has proved to be one of Tchaikovsky’s most enduringly popular works, a piece he described as being “passionately in love with”. Inspired in part by Mozart, its elegant music weaves Russian folk-song, and a fine example of the composer’s beloved Waltz, with an elegiac musical centrepiece.

Also featured on this release is Bartók’s 'Divertimento', one of the composer’s last works before leaving Europe for exile in the US. The Divertimento is a highly original work in its own unique idiom, contrasting two buoyant and light-hearted movements with a sombre Adagio in four sections.

Roman Simovic, leader of the LSO & the LSO String Ensemble, says of the ensemble’s premiere recording, "I am thrilled every time I direct the LSO Strings. With an incredible amount of energy in just a few days we achieved a huge spectrum of colours in the Tchaikovsky Serenade for Strings and Bartok’s Divertimento. We wanted to achieve an intimate chamber sound by relying on our ears and our reactions. Every player realised their own personal importance and impact on this recording and it is a big honour for me to be a part of their team and this recording. I think the LSO Strings are a very special ensemble".

[Simovic] encourages a soaring cantabile reminiscent of Herbert von Karajan's early 1980s take [on the Serenade] with the Berlin Phil, but without the German's sheer heft...If the Tchaikovsky occasionally lacks a sense of earthy, visceral excitement, the bracing folk-music rhythms of Bartok's Divertimento respond particularly well to Simovic's affectionate approach.

The accuracy of his [Roman Simovic’s] tempos help develop a primarily balanced vision, never at the expense of emotion and mystery… this leaderless approach magnifies the outpouring of ideas in the writings of Bartok… The LSO strings animate its [Serenade for Strings] four movements with ease, sound finesse and wonderful phrasing.

in both works the control of dynamics, inner voicing and rhythm is marvellous.

the performance is…an enjoyable one, catching fire in the finale where the focus on gentle gradations of tone and timbre yields to the more earthy vivacity one might have expected from this source.

[Simovic] is one of the reasons why this is a disc well worth seeking out: an unusual coupling, but a highly successful one. Superb recorded sound helps to complete the package.