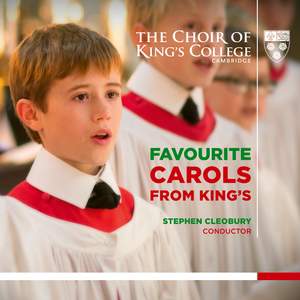 The choir's glory remains its boy trebles, whose gleaming descants, vibrato-free production and tonal freshness are invariably the icing on the cake in these typically polished, debonair performances. — BBC Music Magazine, Christmas 2014, More…

William Holford: Joy to the World

trad.: Angels from the Realms Of Glory

trad.: It came upon the midnight clear

Rutter: All bells in paradise

With their annual Christmas broadcasts, the Choir of King’s College, Cambridge has become a centrepiece of the yuletide tradition for families around the world.

For 2014, the choir is delighted to release the first collection of favourite carols on its own label, recorded in the magnificent acoustic of King’s College Chapel on CD.

'Favourite Carols from King’s' is a collection of the most popular carols featured in the Festival of Nine Lessons and Carols over the years. Highlights include 'Once in Royal David’s City', with the opening verse sung by treble Adam Banwell, 'In the Bleak Midwinter', solo performed by bass Hugo Herman-Wilson and 'Hark! The Herald Angels Sing'. It provides at once a survey of the King’s Christmas tradition and a snapshot of the choir as it is today.

The album is the acclaimed label’s sixth release, joining other successfully received recordings such as the debut release ‘Nine Lessons and Carols’ which reached number 2 in the UK Specialist Classical Chart, ‘Mozart Requiem Realisations’ ****/**** from BBC Music Magazine, and ‘Britten St Nicolas’ which received 5 stars in the Financial Times.

The album’s release will be accompanied by an extensive international press and marketing campaign. The Choir of King’s College, Cambridge will perform Bach’s 'Magnificat' at The Chapel, Cambridge, on the 12th November 2014, with the OAE,and again at the Barbican, London, on the 6th December 2014, conducted by Stephen Cleobury. On the 16th and 17th December the Choir and Stephen Cleobury will appear in Edinburgh's Usher Hall, performing Christmas music including Poulenc’s 'Quatre Motets pour le temps de Noël'. The Choir of King’s College, Cambridge is one of the world’s foremost choirs and amongst the most widely heard. It owes its existence to King Henry VI, who envisaged the daily singing of services in his magnificent chapel. This remains the Choir’s raison d’être, and is an important part of the lives of its 16 choristers, who are educated at King’s College School, and the 14 choral scholars and two organ scholars, who study a variety of subjects in the College. The Choir has produced numerous professional singers including James Gilchrist, Christopher Purves and Gerald Finley.

The choir's glory remains its boy trebles, whose gleaming descants, vibrato-free production and tonal freshness are invariably the icing on the cake in these typically polished, debonair performances.

exactly what one would hope for...Throughout, the singing is immaculate and full of unexaggerated expression.

If you want a disc of well-loved carols and one which offers the 'imprimatur' of the King's College Choir then this disc will serve you well. The choir is on fine form, the three Organ Scholars between them provide expert accompaniments to many of the carols and the performances have been well recorded…a generous selection of mostly traditional seasonal fare…satisfyingly performed.