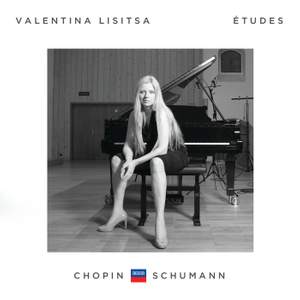 Lisitsa pulls off the technical high jinks of Chopin's etudes with fleet fingerwork, though they don't sound enough like musical poems. — BBC Music Magazine, February 2015, 2 out of 5 stars

No.4 In C Sharp Minor

No.6 In E Flat Minor

No.12 In C Minor "Revolutionary"

No.6 In G Sharp Minor

No.7 In C Sharp Minor

No.8 In D Flat Major

Chopin: 3 Nouvelles Etudes No.2 In A Flat

Following her recent well-received Michael Nyman recording Chasing Pianos, Valentina now turns her attention to the Romantic Era and the Études of Chopin and Schumann.

Chopin’s Études were the first to be seen as true piano works rather than merely studies. Quickly becoming a regular part of the concert repertoire, these are some of the most challenging and evocative works for piano.

Schumann’s Symphonic Etudes, believed to be some of the most difficult music for the piano are also featured on this release, including five additional movements restored by Brahms in 1890 after Schumann’s death.

No other artist on a major label has offered this exciting combination, totalling 85 minutes of music on one CD.

Lisitsa pulls off the technical high jinks of Chopin's etudes with fleet fingerwork, though they don't sound enough like musical poems.