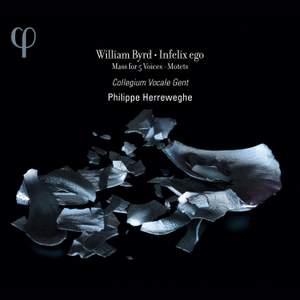 Philippe Herreweghe and his Collegium Vocale Gent present their third project for Phi focussing on vocal music of the Renaissance. This time, it is the English composer William Byrd (c.1540-1623) who is being honoured. The title of the programme is that of Byrd’s motet Infelix ego, one of the greatest artistic statements of the 16th century. Its text is a meditation on Psalm 50, written by the Dominica Girolamo Savonarola, a remarkable man who waged a campaign against the corrupt Medici family in Florence.

Taking the form of several rhetorical questions and assertions, the text describes all the emotions felt by a tormented soul: guilt, fear, embarrassment, anger but above all the gift of deliverance upon acceptance of Christ’s mercy. Byrd seems to have felt a powerful emotional connection with the words.

The Collegium Vocale Gent also presents the Mass for 5 Voices and a selection of motets by Byrd, along with Alfonso Ferrabosco’s Peccantem me quotidie a5 and Philippus de Monte’s Miserere mei a5.

this intimate account of his wonderful five-part mass is appropriate and, as conjured up by Philippe Herreweghe’s direction, quite different from the usual English choral style. The 12 singers are flexible, gentle and expressive, rising to sustained power in the rich Agnus Dei.