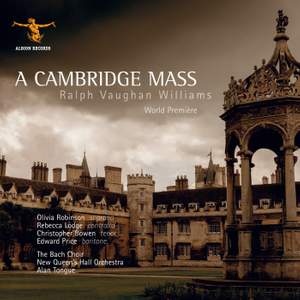 It might seem a dubious idea to take out of mothballs a work written specifically for its composer's Doctor of Music degree - surely a recipe for academic conformity and little else? Coming from... — BBC Music Magazine, Christmas 2014, 3 out of 5 stars More…

In 1897 Vaughan Williams began work on his exercise for the degree of Doctor of Music from Cambridge University. He finished the degree work – what we now call A Cambridge Mass - in January, 1899 and was duly awarded the Doctorate in 1901. Despite talk of other honours in later years, he was proud to be known as Dr Ralph Vaughan Williams from that date on.

Vaughan Williams’ period at Cambridge was to influence his character, friendships, ideals and musical development for the rest of his life.

It might seem a dubious idea to take out of mothballs a work written specifically for its composer's Doctor of Music degree - surely a recipe for academic conformity and little else? Coming from Vaughan Williams, however, A Cambridge Mass also contains material of genuine quality...The performance has a likeable buzz of atmosphere, with four decently blending soloists, and pleasing orchestral playing on period instruments.

The Bach Choir and the New Queen's Hall Orchestra - particularly the brass - give a performance full of period character and verve...This is a portrait of an artist still under construction - a vivid and fascinating glimpse of Vaughan Williams before he was truly himself.

Musically what comes across is a tremendous sense of technical assurance...There is vigour and energy aplenty...The Bach Choir sings lustily against VW's often untamed orchestration; the four soloists have few stand-out moments, but do well with what they are given.

The work has been well served in this first performance. The Bach Choir sings very well indeed and the orchestral contribution is equally good. The New Queen’s Hall Orchestra plays on the sort of instruments that would have been used by London orchestras at the turn of the twentieth century and the somewhat softer sound, as compared to that produced by modern orchestras, is a boon here.