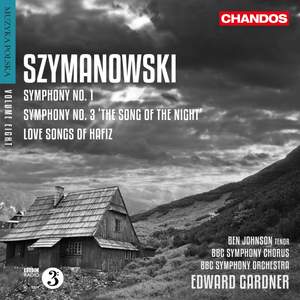 The BBC Symphony Chorus sings with languid exaltation, yet it is the orchestral detail that impresses most here, right from the still, mystery-laden opening...Gardner conducts with such conviction... — BBC Music Magazine, February 2015, 4 out of 5 stars More…

Edward Gardner returns with the BBC Symphony Orchestra to the intoxicating orchestral music of Karol Szymanowski in their third disc devoted to the composer. Their previous releases have been widely praised, Gardner being described in BBC Music Magazine as ‘one of the finest non-Polish interpreters of Szymanowski.’ Ben Johnson, a tenor whose star is rapidly rising, joins Gardner and the BBC SO here as a soloist in two works.

Szymanowski’s Symphony No. 1 was composed in 1907 while he was still in his twenties. Stylistically it belongs to his early period, heavily influenced by the late-Romantic style of Wagner and Strauss. It was disavowed later in life as Szymanowski rejected his early influences but its brash youthful energy and intense emotion has won many audiences over.

The exquisite Love Songs of Hafiz for tenor soloist and orchestra are transitional works. Composed in 1911, they represent a move toward his middle period marked by a fascination with oriental themes, here reflected in the choice to set 14th Century Persian poetry.

Szymanowski’s Symphony No. 3 ‘Song of the Night’ is considered the apex of his middle-period output and one of his finest works. Scored for a huge orchestra with choir and tenor soloist, Szymanowski again sets Persian poetry, here celebrating the beauty of the starlight Eastern night. Szymanowski conveys the poem’s vision with sensuous and highly emotional music, scored in extraordinarily subtle orchestral colour.

The BBC Symphony Chorus sings with languid exaltation, yet it is the orchestral detail that impresses most here, right from the still, mystery-laden opening...Gardner conducts with such conviction that it is impossible not to find beauty in [Love Songs'] potentially dense Reger-meets-Scriabin soundworld.

performances are particularly cosmopolitan. And why not? The works here reflect influences from many nationalities...Johnson, whose relatively lean voice (in contrast with the Eastern European sopranos sometimes heard in this piece) is very much responsive to the text's meaning.

Johnson is a fine soloist [in the Songs of Hafiz], while Gardner’s forces are ecstatic in these near-masterpieces; they also make a decent case for the disowned post-romantic First Symphony.

That magical moment where the solo tenor voice (Ben Johnson) floats in at the start of part 3 is exquisitely judged, heralding delicate images of nature and surging climaxes in which Gardner whips up the BBC chorus and orchestra into waves of elated passion.