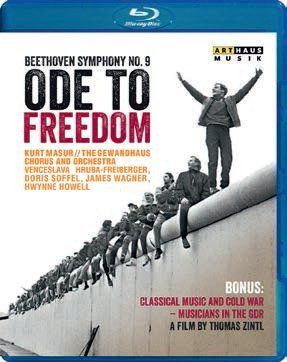 Beethoven Symphony No. 9: Ode to Freedom

On the occasion of the 25th anniversary of the fall of the Berlin Wall on 9 November 1989, Arthaus Musik combines two unique programmes in one Blu-ray.

The performance of Beethoven's Symphony No.9 at the Gewandhaus Leipzig in the reunited Germany turned out to be a great success for Kurt Masur, who was music director of the Gewandhaus Orchestra from 1970 to 1996 and who decisively shaped the orchestra before and after the fall of the Wall.

The Echo Award winning film documentation 'Classical and Cold War – Musicians in the GDR' by Thomas Zintl spans the range from the founding of the two German states in 1949 to the fall of the Wall. Using archive material and interviews with contemporary witnesses like Helmut Schmidt, Peter Schreier and Kurt Masur, the documentation draws the parallelism between the cultural and political developments.

"This documentary is more than a study on the power of classical music, it is the proof that sounds can make history." Axel Brüggemann, Echo Klassik

'Classical Music and Cold War – Musicians in the GDR'

A Film by Thomas Zintl