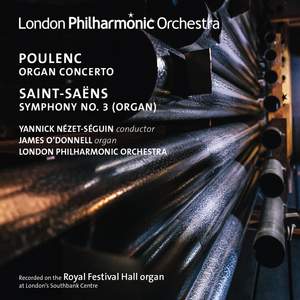 these live performances showcase different aspects of this remarkable instrument's capabilities in tandem with orchestra. The Poulenc is generally a hard-edged performance, James O'Donnell dispatching... — BBC Music Magazine, January 2015, 3 out of 5 stars More…

This is the first recording released on the newly refurbished Royal Festival Hall organ. This sell out concert in March 2014 was part of the Pull Out All The Stops festival launching the refurbished Harrison and Harrison organ, complete for the first time since 2005. The sense of occasion in this live recording is palpable.

From the first earth-shattering chord of the Poulenc, it is clear that this is an instrument of hugely impressive proportions. The thrilling finale of the Saint-Saëns in particular showcases the organ’s resonant bass; the packed Royal Festival Hall vibrating to its core.

In the adept hand of conductor Yannick Nézet-Séguin, the Saint-Saëns Symphony demonstrates how well this huge instrument integrates with the Orchestra – always a challenge in live recordings. There is an amazing transparency of sound between organ and orchestra, and a sense of space that allows the music to breathe naturally.

Soloist James O’Donnell, Organist and Master of Music at Westminster Abbey, has received numerous awards and honours for his recordings, including the Gramophone Award for ‘Record of the Year’ in 1998 for his recording of Masses by Martin and Pizzetti for Hyperion.

Booklet includes full organ specification and an article on the history and refurbishment of the organ by its curator, Dr William McVicker.

these live performances showcase different aspects of this remarkable instrument's capabilities in tandem with orchestra. The Poulenc is generally a hard-edged performance, James O'Donnell dispatching its dramatic opening with a brisk imperious strut tather than a grandiose swagger.

James O’Donnell finds plenty of warmth and colour in the instrument which, combined with some rich string playing, benefits from the improved acoustics of the hall...plenty of verve and passion in equal measure and the performance is rightly rewarded by a rapturous response from the audience at the end.

conducted with élan by Yannick Nézet-Séguin and expertly played by the London Philharmonic Orchestra. The Poulenc, in particular, gets a blistering performance. The Saint-Saëns plays a long game and rises to a suitably magniloquent ending. James O’Donnell, organist of Westminster Abbey, is master of the king of instruments.

All in all, it is the faster music that seems to come off best, with a good rhythmic pulse in the Poulenc together with organ-playing of sensitivity and spark from O'Donnell, and with plenty of nervous energy, impetus and instrumental detail in the outer parts of the Saint-Saens.

Nézet-Séguin brings out all the contrasts in this bipolar score with a confidence and flair that one normally associates with conductors of far greater experience. His grip is tight but never throttling and he’s fortunate to have at his fingertips a band that responds with alacrity to his every demand.