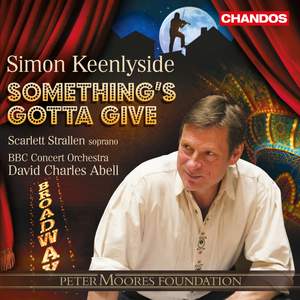 Keenlyside manages to adapt his voice without any self-consciousness, and what comes across is a fabulous sense of lyrical line, a gorgeous creamy tone, acute characterization and superb diction,... — International Record Review, December 2014 More…

Loewe, F: My Fair Lady: On the street where you live

Rodgers, R: O what a beautiful morning (from Oklahoma!)

People Will Say We're in Love (From "Oklahoma!")

Bock, J: When Did I Fall in Love? (from Fiorello!)

Reviewing the Situation (From "Oliver!")

Rodgers, R: If I Loved You (Bench Scene) [From "Carousel")

Forrest: Stranger in Paradise (from Kismet)

Rodgers, R: State Fair: It Might As Well Be Spring

The Girl Next Door (From "Meet Me in St. Louis")

Styne: It’s Magic (from Romance on the High Seas)

Oh, What a Beautiful Mornin' (From "Oklahoma!")

Bock, J: If I were a rich man (from Fiddler on the Roof)

If I Loved You (Bench Scene) [From "Carousel")

To this day, music from classic Broadway and Hollywood musicals continues to enjoy immense popularity with audiences and performers alike. Here Simon Keenlyside, one of the world’s most charismatic and sought-after operatic baritones, presents Something’s Gotta Give, an album devoted to songs from musicals – songs that require every bit as much attention to text and interpretation as Lieder, and often the same mastery of vocal technique as operatic arias. Scarlett Strallen, a regular presence of West End and Broadway stages, partners Keenlyside in duets and sings two numbers on her own. They are joined by David Charles Abell, a musician steeped in the tradition of musical theatre, who conducts the BBC Concert Orchestra in wonderfully lush original orchestral arrangements, a number of which have been specially restored for this recording.

The programme includes some of the best loved numbers in the repertoire, including Cole Porter’s ‘Night and Day’, Rodgers and Hammerstein’s ‘Oh What a Beautiful Mornin’’, and ‘If I Were a Rich Man’ from Fiddler on the Roof. The range represented, from the emotional tour de force of ‘Soliloquy’ to the charming character song ‘Reviewing the Situation’, showcases the many facets of Simon Keenlyside both as an extraordinary vocalist and endlessly charismatic performer.

Keenlyside manages to adapt his voice without any self-consciousness, and what comes across is a fabulous sense of lyrical line, a gorgeous creamy tone, acute characterization and superb diction, all the songs performed with a style and flair that is impossible to resist...This is superb Broadway singing, so much so that I quickly forgot that I was listening to one of the best opera singers of his generation.

Keenlyside includes much Richard Rodgers, rightly, as he’s a marvellous composer: the big numbers from Oklahoma! and from Carousel, not only the Soliloquy (grist to an opera singer’s mill) but also the Bench Scene, where he is joined by a more than capable Scarlett Strallen.

He is in easy, laid-back voice in characters ranging from Fagin to Freddy Eynsford-Hill. Strallen is a delight, and David Charles Abell and the BBC Concert Orchestra give sumptuous support.