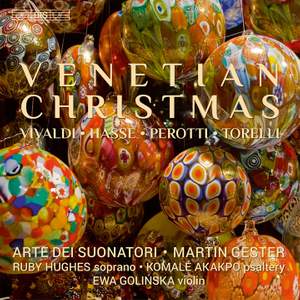 Some tenuous theming here, but who cares when the music-making - tart and spicy on period-instruments - is so appealing? — BBC Music Magazine, Christmas 2014, 4 out of 5 stars More…

Recording of the Week,  Music for Christmas

Katherine listens to some of this year's Christmas discs, featuring Renee Fleming, the choir of Clare College Cambridge and Arte dei Suonatori.

In Venice in the 18th century, Christmas was celebrated as only Venetians know how to celebrate: according to one account, more wax was burnt to light up the three storeys of the Procuratie on Christmas Eve, than in all the rest of Italy in an entire year. At the same time, rather than being an independent feast – and as such, the most singularly important one of the year – the Venetian Christmas was also part of the city's famous Carnevale, which at this time lasted for almost six months. This lent a rather special character to the celebrations, compared with for instance the more clerically inclined Rome. We know that much of the Christmas festivities – in churches, in the streets or at private parties – involved music, but very little of the actual repertoire has been identified. Possibly this is also a reflection of the role of Christmas in Venice – although a festive occasion, it wasn't an isolated one, and much of the music heard at Christmas would or could be played on suitable feast days throughout the year. Together with the soloists Ruby Hughes and Komalé Akakpo, Martin Gester and Arte dei Suonatori have constructed a colourful programme of music that we either know or can easily conjecture was being played during a typical Venetian Christmas. Naturally it includes music by Antonio Vivaldi, the city's great son, as well as by Johann Adolph Hasse, who throughout his life was a regular visitor, and who spent his last ten years there. It also features the psaltery or salterio, an instrument beloved by the Venetians, heard here as solo as well as continuo instrument. Three of the works by Vivaldi are performed in versions prepared by Olivier Fourès, and are recorded here for the first time, including the Andante ‘Il Riposo per il Santissimo Natale’ with Ewa Golińska, co-leader of Arte dei Suonatori, as violin soloist.

Some tenuous theming here, but who cares when the music-making - tart and spicy on period-instruments - is so appealing?

[Hughes's] part in this CD leaves nothing to be desired...This disc's connection to Christmas seems rather loose, but it is a most interesting and musically rewarding production anyway. It can be played at any time of the year.

this ‘educated guess’ programme of vocal works and concerti by Vivaldi, Hasse, Torelli and Perotti (all composers with Venetian connections) brings much pleasure and is played with verve on authentic instruments by Arte Dei Suonatori. The agile, warm-toned British soprano Ruby Hughes...is engaging in Hasse and Vivaldi, and a special delight is the presence of the psaltery in the first few tracks.