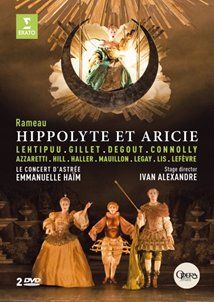 Emmanuelle Haïm has established herself as one of the world’s leading performers, conductors and interpreters of Baroque repertoire, not only with Le Concert d’Astrée, the ensemble she founded in 2000, but with several of the world’s greatest orchestras. Known for her fresh and expressive approach to Baroque music, she has garnered critical acclaim and several international awards with her own ensemble, including Victoires de la Musique Classique, ECHOs, Gramophone Awards, and Grammy nominations.

In this DVD recorded live at the Paris Opera Palais Garnier, Haïm is joined by the orchestra of Le Concert d’Astrée, as well stellar cast including Sarah Connolly as Phèdre, Stéphane Degout as Thésée, Anne-Catherine Gillet as Aricie and Topi Lehtipuu as Hippolyte in the acclaimed production from Ivan Alexandre.

Alexandre's rigorously historical production...requires that singers almost always face the front and sing downstage, even when addressing lines to each other...The controlled delivery of the drama is consequently unhurried and there are subtle ideas that might not be obvious at first viewing...Stéphane Degout's dignified Theseus and Sarah Connolly's anguished Phaedra both sing magnificently.

Topi Lehtipuu and Anne-Catherine Gillet in the title roles are a well-matched pair of young lovers with unforced, agile voices. Stéphane Degout is a solidly regal Tésée; his wife Phèdre, infatuated with her stepson Hippolyte, is played Connolly. Andrea Hill impresses as Diane, seemingly unphased by the swaying cut-out cloud on which she is suspended, and Jaël Azzaretti is a winsome Amour. The conductor Emmanuelle Haïm maintains a lively pace, ensuring sensitivity when needed, the playing of her period-instrument band Le Concert d’Astrée crisp and nimble despite its opulent size.

it aims to recreate the sort of sumptuously costumed and ritualised spectacle Louis XV might have enjoyed when the piece was first performed in 1733. What elevates it from being exotic high camp is the superb musical performance, conducted by the indefatigable Emmanuelle Haïm and sung by an unbeatable cast led by an imperious Sarah Connolly.