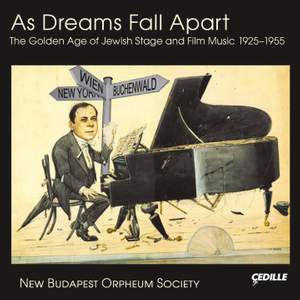 Leopoldi: I bin a stiller Zecher

The Ruins of Berlin

The New Budapest Orpheum Society, ensemble-in-residence in the Division of Humanities at the University of Chicago, has been tracing the origins, development and influence of European Jewish cabaret music through extensive historical research and compelling performances in concert and on a series of widely acclaimed albums on Cedille Records.

The ensemble’s third and newest project focuses on Jewish stage and film music from the early to mid-20th century.

The ensemble’s first Cedille album, 'Dancing on the Edge of a Volcano', drew praise from BBC Music Magazine as a “fascinating and strongly projected collection” offering “tantalizing” examples of cabaret, popular and political songs of the early 20th century. The Berkshire Jewish Voice said the works on the ensemble’s second Cedille CD, 'Jewish Cabaret in Exile', “attest to the poignancy and vitality of the art of Jewish cabaret.”

In addition to its Chicago-area performances, the New Budapest Orpheum Society tours widely, performing at Symphony Space, Café Sabarsky, and the YIVO Institute for Jewish Research in New York City, and the United States Memorial Holocaust Museum in Washington, DC. The ensemble and its artistic director, Philip V Bohlman, received the Noah Greenwood Award for Historical Performance from the American Musicological Society.