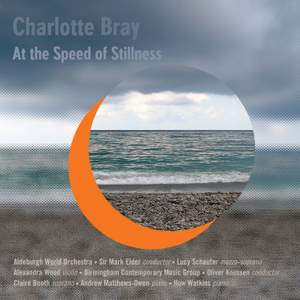 Offer, Charlotte Bray: At The Speed Of Stillness

These six works by a new British composer (b1982) attest a sharp ear and a vigorous imagination...Inspired by the image of hidden dynamism Bray finds in Sizewell power station and its radial... — Sunday Times, 19th October 2014 More…

Bray, C: At the Speed of Stillness

Debut Discs is a 4-year series in collaboration with BA (Hons) Graphic Design students at Central Saint Martins College of Arts and Design who have designed the cover artwork for the series.

Born in the UK in 1982, Charlotte Bray studied with Joe Cutler and graduated from Birmingham Conservatoire with First Class Honours. Then, with Mark Anthony Turnage, she completed her Masters at the Royal College of Music in 2008 gaining a Distinction. She studied at Tanglewood Music Centre in 2008, and in 2011 was made an Honorary Member of Birmingham Conservatoire. She has won numerous prizes, including the RPS composition prize in 2010.

Bayan Northcott writes … Charlotte Bray was 21 when she took to composing in earnest. Yet in scarcely more than a decade, she has built up a substantial catalogue of works in almost all the standard genres; built up, too, a professional reputation of a composer who works hard and always delivers. Not least, she has refined a compositional style and practice for herself, neither explicitly tonal nor atonal, but always cogent in its harmonic unfolding – token of an independent spirit from which much may be expected.

These six works by a new British composer (b1982) attest a sharp ear and a vigorous imagination...Inspired by the image of hidden dynamism Bray finds in Sizewell power station and its radial treetop power lines, the music’s inventiveness and textural control are unmistakeable.