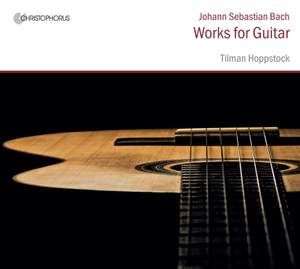 The renowned German guitarist Tilman Hoppstock has made many recordings, but he has always been particularly devoted to the works of Johann Sebastian Bach. His musicological printed edition of Bach's lute works is considered a standard work amongst guitarists today, as is his two-volume book summarising a 30-year research project. Most recently, Tilman Hoppstock received his doctorate this year with a doctoral thesis on this subject. The present double CD now brings together all the Bach recordings ever made by Tilman Hoppstock, thus representing, for the first time, a comprehensive compendium of the works of Johann Sebastian Bach for all friends of the guitar (and of Bach).

"I was initially delighted over the suggestion of the recording company Christophorus to release all the works of Johann Sebastian Bach that I have so far recorded together on a double CD. All these are productions made over the course of 22 years between 1979 and 2001. Thus, on the one hand, this double CD introduces the manifold possibilities of interpreting Bach‘s works on the guitar, but also, on the other hand, opens up - like a kaleidoscope - the view onto different interpretative approaches from various phases of my artistic development and forms, not least, a compendium of my intensive occupation with the works of Johann Sebastian Bach over many years." Tilman Hoppstock