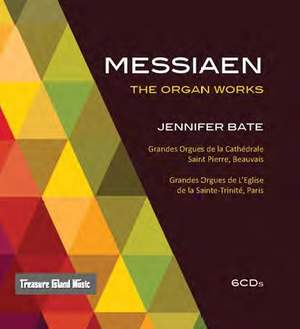 Jennifer Bate enjoys a unique reputation as a world authority on the French composer, Olivier Messiaen, and was his organist of choice. Unicorn-Kanchana recorded the complete organ works between 1979 and 1981, appearing subsequently on CD. Each volume was heard by Messiaen prior to its final editing; he endorsed every one with enormous enthusiasm. All won international acclaim. Her world première recording of his last masterpiece for organ, 'Livre du Saint Sacrement', had exceptional international success, winning a Grand Prix du Disque. Treasure Island are to be commended on the reissue of these classic recordings on the occasion of her 70th birthday, and are re-releasing all of Jennifer’s Unicorn and Unicorn-Kanchana recordings. Future releases will include the works of César Franck. Also due for rerelease this autumn [on the Heritage label] is Jennifer's recording of Peter Dickinson’s Organ Concerto, originally recorded for EMI.