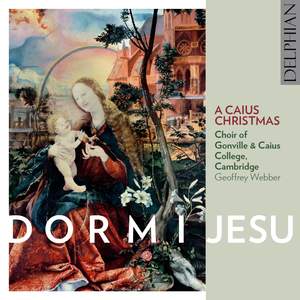 Owens, M: The holly and the ivy

trad.: Greensleeves "What Child Is This" (Arr. T.H. Jones)

Tranchell: If ye would hear the angels sing

It was with typical discernment that Geoffrey Webber responded to a request to put together his dream Christmas programme. Opening with Jan Sandström’s sublime deconstruction of Es ist ein Ros entsprungen', Webber’s classy choir reveals and delights in equal measure, finding space for both the Venetian lushness of Gabrieli and the distilled purity of Webern in a seasonal collection which is also sprinkled with unexpected gems of more recent provenance. Edward Higginbottom’s jazz-infused 'Rocking Carol', Thomas Hewitt Jones’s eloquently expressive 'What Child is This?', and the small miracle that is Matthew Owens’ reimagined setting of 'The Holly and the Ivy' all glitter in a programme that dovetails ld and new with characteristic Cambridge sophistication. Founded in 1348, Caius College Choir is one of Britain’s leading collegiate choirs and this is their seventh recording on Delphian. Among the accolades they have received, their 2011 recording of music by Judith Weir (DCD34095) was BBC Music Magazine’s Choral and Song Choice in December 2011. Their most recent release ‘In Praise of St Columba’ (DCD34137) has enjoyed a second week in the Top 20 Independent Classical Charts at the time of writing, and a disc of choral music from Brazil is in preparation for release in 2015. The choir has also joined together with the Choir of King’s College London in two recording projects: Rodion Shchedrin’s Russian liturgy 'The Sealed Angel' (DCD34067) and 'Deutsche Motette: German Romantic choral music' from Schubert to Strauss (DCD34124).

they are a super ensemble and have been moulded to deliver a specific and warm sound by Geoffrey Webber ever since the late 1980s … The texts are clearly provided in the original words and have been excellently translated.