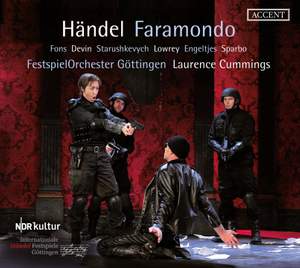 Faramondo is not one of Handel’s best known operas. It was first performed in January 1738 at the King’s Theatre, Haymarket in London; there were a total of eight performances and it was never revived during Handel's lifetime. The plot is based on the story of Pharamond, a mythological King of France, in the 5th Century AD. Faramondo, King of the Franks, and his former ally Gernando, King of the Swabians, are in love with the same woman, Rosimonda, daughter of the hostile Cimbrian King Gustavo. Her brother Adolfo loves Faramondo’s sister Clotilde and rebels against his father, who sentences him to death. A story of revenge, intrigues, love and jealousy takes its fateful course. Out of love for Rosimonda, the disguised Faramondo joins forces with her father in the fight against the traitors. In 2014, Handel’s opera received its first performance at the Göttingen International Handel Festival with a young cast performing under the musical direction of Laurence Cummings. This live recording is the second release (after Handel’s 'Siroe') in a new collaboration between the Accent label and the Göttingen International Händel Festival.

NB booklet-error: the English-language synopsis included in the booklet is for Siroe rather than Faramondo.

this performance under Laurence Cummings is artfully prepared and brilliantly detailed...Cummings's orchestra is alert and assured, witha well-fed bass-line and elegant violins...Fons delivers a stunning 'Si tornero a morir' and leads an almost ideal cast of young singers.

all of the singers are of such a high standard and so pleasing in their renditions, that all must be praised evenly…Definitely one for the collection, and I don’t think it will age either – the musicianship will stand the test of time and fashion.

Cummings and his expert Gottingen Festival Orchestra produce a fine account of this undervalued opera, with varied orchestral subtleties and a sure mastery of Handelian style...The title-hero is sung masterfully Emily Fons...Anna Devin has steel and style in equal measure.

Where have they been hiding Fons? She has a focused, dark-hued voice with the suppleness to transcend the coloratura of such arias as ‘Sebben me lusinga’ … Cummings and his orchestra do full justice to the music.

all [the singers] are technically more than adequate to the demands of the music and some are splendid. The palm, however, must go to the trio of female singers in the lead roles of Faramondo, Clotilde and Rosimonda. All have warm, flexible agile voices and generate considerable excitement and dramatic tension in their arias...Cummings’ conducting is first class, with plenty of rhythmic spring and inner vitality.