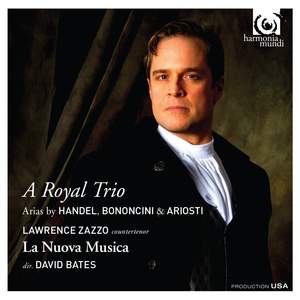 This is an exceptionally interesting and well researched release…The playing is superb throughout. — Early Music Review, December 2014 More…

The countertenor talks to Katherine about his new disc of music commissioned by The Royal Academy of Music in the 1720s.

A dazzling Royal trio. Founded in 1719 as the first opera company in the English-speaking world, the Royal Academy of Music commissioned and premièred some of the finest 18th-century operas, including Handel’s 'Giulio Cesare'. Here are a dozen arias from operas written in the 10 year period from 1719-29 for their star castrati, particularly Senesino: some well known [Va tacito] and some less well known. Renowned American countertenor Lawrence Zazzo is joined by La Nuova Musica and David Bates for a snapshot of the Academy’s hits circa 1725 featuring arias by Handel, Ariosti and Bononcini.

This is an exceptionally interesting and well researched release…The playing is superb throughout.

I enjoyed this snapshot of London's operatic life almost without reservation. Zazzo and the players - not least the fabulous horns - have all the boldness and virtuoso panache one could wish for in the extrovert arias, culminating in a show-stopping 'Vivi, tiranno'.

This is an accomplished recital from both singer and orchestra, the latter playing freshly under Bates’s direction in a programme which contains some rarely heard music.

Is there no end to the making of countertenor baroque opera recital discs? The genre can too easily turn into showy virtuosity, but this one from Lawrence Zazzo is exceptionally well thought out... the exuberant Vivi, tiranno rounds things off in style, with Zazzo in glorious voice throughout.

In a world awash with fine countertenors Lawrence Zazzo is one of its aristocrats. The possessor of a voice of natural beauty and an enviable ease of production, he is on excellent form, singing with noble tone and dramatic conviction…Zazzo is given fine support by Bates and the excellent La Nuova Musica.

[Zazzo gives] committed and dramatically excellent renditions of these roles. The surround sound is outstanding, and the production values rank with harmonia mundi’s best, which is always considerable.