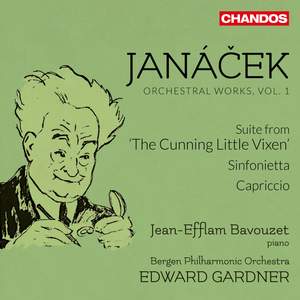 we have a fine interpreter of Janáček and a distinguished orchestra...Orchestral ensemble is good though not always the intonation. still, the remaining movements are more compelling, with vivid... — BBC Music Magazine, Christmas 2014, 4 out of 5 stars More…

James listens to the first instalment in an exciting new series – Chandos’ survey of the orchestral works of Janáček, conducted by Edward Gardner.

Edward Gardner conducts the Bergen Philharmonic Orchestra in the opening volume in their series devoted to orchestral works by Leoš Janáček. It features three pieces that originate in Janáček’s late period, when his passionate feelings for Kamila Stösslová, thirty-seven years his junior, inspired an extraordinary flowering of his creative genius.

The Sinfonietta is one of Janáček’s most successful and popular works, famed for its opening movement, a brazen fanfare scored for a phalanx of brass with timpani. The remaining four movements, full of character, celebrate Janáček’s adopted town of Brno, blending occasional reflection with high-voltage exuberance.

Scored unusually for left-hand piano and an ensemble of brass and flute, the Capriccio is remarkable even among Janáček’s distinctive late works. Its overall effect is mercurial and capricious, in the composer’s words: ‘whimsical, all wilfulness and witticisms’. Jean-Efflam Bavouzet employs his formidable technique and interpretative flair in the solo part.

we have a fine interpreter of Janáček and a distinguished orchestra...Orchestral ensemble is good though not always the intonation. still, the remaining movements are more compelling, with vivid orchestral playing, including luxurious strings in the third movement.

Bavouzet enters delightfully into its schizophrenic mindset, half-jaunty, half-ruminative. Edward Gardner, the conductor, is brilliantly animated in the coruscating Sinfonietta and the loveable suite from The Cunning Little Vixen

the players are brilliant and the sound is glorious, very skilfully recorded...the Bavouzet performs dazzling feats of virtuosity with a truly exacting solo part; and the extraordinary, fascinating textures are displayed by both artists and recording engineers.

Gardner’s way with Janáček’s music is not the only way – but it’s pretty persuasive. The Bergen Philharmonic offer excellent playing throughout this programme and Chandos have recorded the orchestra in warm but well-detailed and well–focused sound...This, I suspect, is going to be a rewarding series to follow and this first disc is an auspicious start.

the wonderfully quirky instrumentation of piano left hand, flute/piccolo, trumpets, trombones and tenor tuba against the Capriccio...makes these splendidly vivid performances most welcome. The Vixen suite, in Mackerras’s restoration, completes an exhilarating disc.

While both the Sinfonietta and the suite...receive fine performances – and in the case of the Sinfonietta’s later movements, particularly feisty, urgent ones – it’s the account of the wonderfully quirky Capriccio between them with Jean-Efflam Bavouzet as soloist that hogs the limelight.