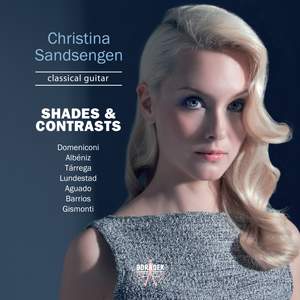 the playing on this entry-level recital, ideal for classical guitar newbies, is impressive enough to sway even the most sceptical classical guitar aficionados. The first thing that strikes you... — Gramophone Magazine, December 2014 More…

Born in 1987, Norwegian guitarist Christina Sandsengen is already established as one of the leading European guitarists of her generation. Her debut release for Odradek pays tribute both to her Scandinavian roots and to the great Iberian guitar tradition, represented by such classics as Francisco Tárrega’s ‘Lágrima’ and Isaac Albéniz’s ‘Asturias’.

In addition, Sandsengen’s programme of expressive and colourful 19th and 20th century repertoire features music by two South American mavericks: Agustín Barrios Mangoré, the celebrated “Paganini of the guitar from the jungles of Paraguay” whose Bachian depiction of a gloomy Cathedral is contrasted with Água e Vinho (Water and Wine) from the pen of the uniquely creative Brazilian Egberto Gismonti.

Latin flamboyance makes way for a Nordic nocturne in the jazzy ‘Late at Night’ by her compatriot Norwegian guitar professor Sven Lundestad. The most substantial work is Carlo Domeniconi’s ‘Koyunbaba’ suite which Sandsengen says “captivates me with its wide spectrum of feelings and Turkish folk spirit”. Performed with a deeply lyrical feel for melody and an unerringly virtuosic sense of tension, Sandsengen’s recording is an intensely personal statement. As she comments: “in hearing it, you know me”.

Christina Sandsengen studied classical guitar at the Norwegian Academy of Music and at the Conservatorio Superior de Música “Manuell Castillo” in Spain, and with Gérard Abiton in Paris. She has performed throughout Norway, in England, Sweden, Turkey, Bolivia, Peru, Spain, Thailand, Malaysia and Singapore, and has participated in many masterclasses with leading guitarists, including Eliot Fisk, Aniello Desiderio and Fabio Zanon. She is director of Oslo Gitarskole, Norway’s leading school for classical guitar, and regularly gives masterclasses across the globe alongside other top artists from the international guitar scene.

the playing on this entry-level recital, ideal for classical guitar newbies, is impressive enough to sway even the most sceptical classical guitar aficionados. The first thing that strikes you about Sangsengen's interpretations is that they are pianistically conceived: each tone is very much a sharply discreet entity and yet fused to the totality.