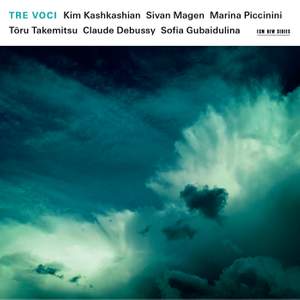 Tre Voci's exceptional musicianship makes apparent the creative kinship between these three beautiful works...Tre Voci brave the potentially harsh light of a close recording so that every nuance... — BBC Music Magazine, Christmas 2014, 5 out of 5 stars More…

Takemitsu: And then I knew ‘twas Wind

All three musicians have been acknowledged for bringing a new voice to their instruments.

Kashkashian, Piccinini and Magen first played together at the 2010 Marlboro Music festival, and agreed that the potential of this combination was too great to limit it to a single season. Since then they have been developing their repertoire.

On this compelling first release it revolves around Debussy’s 1915 Sonata for flute, viola and harp and its influence, most directly felt in Takemitsu’s shimmering ‘And then I knew ‘twas wind’. Debussy himself had been profoundly moved by his encounter with music of the East and in his last works was emphasizing tone-colour, texture and timbre and a different kind of temporal flow. In this music, the elasticity of Debussy’s feeling for time (as Heinz Holliger observed) pointed far into the future and to the works of Boulez. And indeed to the music of Sofia Gubaidulina, whose ‘Garden of Joys and Sorrows’ makes its own reckoning with orient and occident. Gubaidulina has said that she considers herself “a daughter of two worlds, whose soul lives in the music of the East and the West”. Produced by Manfred Eicher in the Lugano Studio.

Tre Voci's exceptional musicianship makes apparent the creative kinship between these three beautiful works...Tre Voci brave the potentially harsh light of a close recording so that every nuance is captured, and Debussy's work emerges sounding contemporaneous with the more recent works.

Gubaidulina's 18-minute musical landscape...has been recorded before but these players guarantee it a more permanent place in the lists...At the core of this beautifully presented programme is a wonderfully keen-eared, uncommonly spacious account of Debussy's Sonata for flute, viola and harp.

Such trios hardly abound, but when Debussy wrote for this potently sensual combination in his 1915 Sonata, he knew what he was doing. This poised reading beautifully realises the work’s restrained sensuality. Just as good are two later, meditative masterpieces in which time seems redefined.

[the Gubaidulina] is more robust than it can be, though still subtle and sensuous.