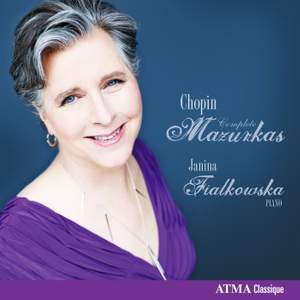 At her best, she is truly among the truly great. In this latest release her authority, imagination, pianistic command and stylistic flexibility are profoundly impressive...Texturally translucent,... — BBC Music Magazine, February 2015, 5 out of 5 stars More…

Unlike his close contemporaries Schumann and Liszt, Chopin was not prone to putting his innermost thoughts and emotions on display for general public consumption; doing so was aesthetically alien to his nature. Not for him were the conflicts of Florestan and Eusebius, so eloquently portrayed in the troubled Schumann’s compositions, or the Faustian dilemma ever-present in Liszt’s outpourings. No, Chopin kept his feelings close to his heart and most definitely not on his sleeve. He was only reluctantly a participant in the Romantic Era, but in spite of his personal reticence, the feelings of this tragic genius eventually found their way into his compositions, and nowhere more so than in his mazurkas.

Through the mazurkas the essence of Chopin is revealed. In these compositions we find him at his most original and daring, and in them he ranges over the widest possible spectrum of emotion and pianistic color. Chopin did not invent the mazurka. A 16th-century peasant dance originating in the province of Mazowsze in Poland and accompanied usually by the dudy (a bagpipe), the mazurka had a delightfully syncopated rhythm in 3/4 time and could be either sung o danced. Originally, mazurkas comprised three kinds of folk dance: the fast accented oberek, the elusive kujawiak (the predecessor of what we know as mazurka form), and the mazur, filled with Slavic sentiment and zal— a unique Polish word describing nostalgia verging on despair.

By the early 19th century, the mazurka dance form had spread across Europe, reaching both Paris — where it was much appreciated by the aristocracy—and England.

The great French composer Hector Berlioz, after hearing his friend Chopin play some of his mazurkas wrote the following:

“There are unbelievable details in his mazurkas and he has found how to render them doubly interesting by playing them with the utmost degree of softness, piano in the extreme, the hammers merely brushing the strings, so much so that one is tempted to go close to the instrument and put one’s ear to it as if to a concert of sylphs or elves”

The legendary Arthur Rubinstein called Janina Fiakowlska “a born Chopin interpreter.” On this recording, she returns with a two CD set devoted to the complete mazurkas of Frédéric Chopin.

This recording by one of the world’s great Chopin interpreters at the culmination of her long and celebrated career will be a milestone for music lovers, and especially for connoisseurs of Chopin’s works.

At her best, she is truly among the truly great. In this latest release her authority, imagination, pianistic command and stylistic flexibility are profoundly impressive...Texturally translucent, melodically compelling, formally gripping, expressively comprehensive - keeping all this in balance, without cost to the music's spontaneity and variety, is a major achievement.

[Fialkowska] says that in playing the mazurkas of Chopin she has been afforded “a glimpse of paradise” — in which case the other world must be for her a place of unvarnished beauty and simple truth...There is little searching for exaggerated effects in her playing, or even the reverential intimacy some pianists have favoured in recordings.

Rubinstein, her longtime mentor, would have been the first to admire her unfailing musical honesty, her refreshing alternative to self-conscious sophistication...you will find an impressive blend of sense and sensibility from Fialkowska, who is well recorded and presented.