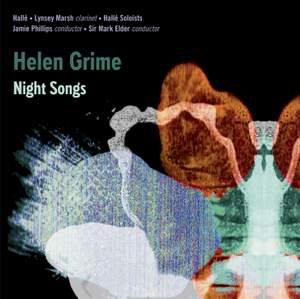 The performances are a tribute to the dedication of Hallé players, whether in orchestral or ensemble guise, and have all been recorded with the spaciousness and immediacy which this music needs. — Gramophone Magazine, December 2014 More…

Grime: Into the faded air

Debut Discs is a 4-year series in collaboration with BA (Hons) Graphic Design students at Central Saint Martin’s College of Arts and Design who have designed the cover artwork for the series.

Born in 1981, Helen Grime studied oboe with John Anderson and composition with Julian Anderson and Edwin Roxburgh at the Royal College of Music. In 2003 she won a British Composer Award for her Oboe Concerto, and was awarded all the major composition prizes in the RCM. In 2008 she was awarded a Leonard Bernstein Fellowship to study at the Tanglewood Music Center. She became a lecturer in composition at the Department of Music at Royal Holloway, University of London, in January 2010. She was appointed Associate Composer to the Hallé in 2011.

Helen has had works commissioned by some of the most established performers including London Symphony Orchestra, BCMG, Britten Sinfonia, BBC Scottish Symphony Orchestra and the Tanglewood Music Center. Conductors who have performed her work include Daniel Harding, Pierre Boulez and Yan Pascal Tortelier. Her work Night Songs was commissioned by the BBC Proms in 2012 and premiered by the BBC Symphony Orchestra, conducted by Oliver Knussen. Grime's Near Midnight receives its London Premiere at this year's BBC Proms (9 August) with the Hallé & Sir Mark Elder.

The performances are a tribute to the dedication of Hallé players, whether in orchestral or ensemble guise, and have all been recorded with the spaciousness and immediacy which this music needs.

Grime (b.1981) is a composer of keen accomplishment in a bright modern mode — glittery, incisive, full of leaping lines and incandescent climaxes — perhaps originating in the harmonically astute, orchestrally virtuosic music of figures such as Oliver Knussen and Magnus Lindberg.

a fine introduction to an important voice in contemporary music. Performances are spot-on, not least from the orchestra’s assistant conductor, Jamie Phillips, making an auspicious debut on disc.