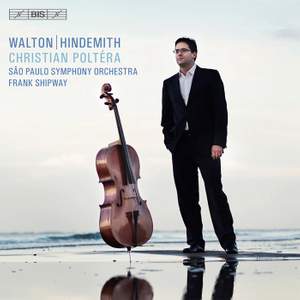 Paul Hindemith and William Walton enjoyed a long friendship, and just a few months before Hindemith’s death in 1963 Walton celebrated the association with his orchestral Variations on a Theme of Hindemith, based on the principal theme of the slow movement of Hindemith’s Cello Concerto.

Both works are expansive three-movement pieces, employing large forces - Walton’s concerto memorably includes a vibraphone, while Hindemith in his Finale gives the celesta an important role.

As a contrast to these two powerful mid-century scores, Christian Poltéra also performs solo works by the two composers. He is supported by the São Paulo Symphony Orchestra (OSESP), widely acclaimed for its recordings of the music of Villa-Lobos, and for a performance (conducted by Frank Shipway) of Richard Strauss’ Alpensymfonie, which was nominated for a 2014 BBC Music Magazine Award.

Fabulously secure in technique, the commanding Poltéra also benefits from wholly sympathetic, reazor-sharp support from the Sao Paulo SO.

The Swiss cellist’s coupling is unusual, but makes complete sense...With the fine Brazilian orchestra, conducted by the late Frank Shipway, Poltera captures the essence of Walton’s “Mediterranean” melancholy and biting wit, and Hindemith’s more detached, yet rigorous and virtuosic, style.