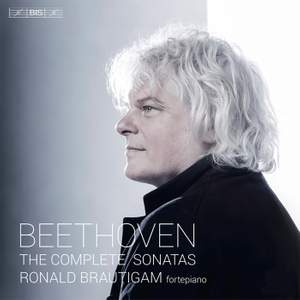 Beethoven: Two Movements from a Sonatina in F major WoO 50

The 32 Piano Sonatas by Ludwig van Beethoven are often referred to as the ‘New Testament’ of the keyboard literature, following on the ‘Old Testament’ of J.S. Bach's 48 preludes and fugues in the Well-Tempered Clavier. Composed over a period of almost three decades, from 1795 to 1822, the sonatas constitute a fascinating panorama of an artistic career which underwent numerous changes – not to say upheavals – but nevertheless remained remarkably consistent. Ever since the first recording of the entire cycle, by Artur Schnabel in the 1930s, a number of the world's leading pianists have given us their performances of this monumental collection on disc. One of the latest cycles is that of Ronald Brautigam, released on single discs between 2004 and 2010. Performed on the fortepiano, as part of a series of Beethoven's complete solo keyboard works, Brautigam's recordings have been described as ‘riveting’, ‘compelling’ and ‘revolutionary’. The eight discs with the 32 sonatas are now being released as a boxed set, along with a ninth disc containing the early, unnumbered sonatas. Contributing factors to the ‘refreshing directness’ that reviewers have experienced in these performances are the widely praised recorded sound and the carefully selected instruments, built by Paul McNulty after originals from 1788-1819 by the foremost Viennese makers of fortepianos. For this boxed set, the original SACD format has been retained – along with the possibility of listening to the performances in surround – thus offering the opportunity of sharing the experience of one reviewer: ‘One has almost the impression of being a contemporary of Beethoven’s: one of the first, infinitely startled – not to say shocked – witnesses to this music’ (Süddeutsche Zeitung).