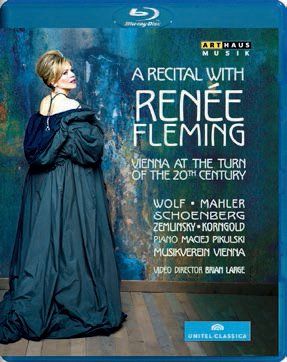 A Recital With Renée Fleming

Vienna At The Turn Of The 20th Century

Zemlinsky: 5 Lieder from a poem by Richard Dehmel for baritone & piano

Live from the Golden Hall of the Musikverein Vienna, 2012

This concert is Renée Fleming’s very personal homage to “Fin de Siècle” Vienna. At the turn of the last century, the capital of the Austrian Empire was also one of the cultural centers for the fi ne arts and, in particular, for music. The city of Haydn, Mozart and Beethoven, a “melting pot” of cultures and musical traditions, attracted gifted musicians and composers alike and provided the perfect soil for much of the greatest music of that time. With this selection of works by Hugo Wolf (1860 -1903) and Gustav Mahler (1860 -1911), combined with more progressive songs by Alexander Zemlinsky (1871 - 1942), Arnold Schoenberg (1874 - 1951) and Erich Wolfgang Korngold (1897 - 1957), Renée Fleming presents to us the full variety of this unique epoch. The venue of her recital with Maciej Pikulski at the piano is, of course, the Golden Hall of the Musikverein Vienna.

Fleming builds up a great sense of pathos in 'Um Mitternacht' and delivers a deeply affecting account of 'Ich bin der Welt abhanden gekommen' supported by some wonderfully sensitive phrasing from Pikulski...But perhaps the composer with whom Fleming most closely identifies is Korngold...nostaglic songs which are beautifully projected by singer and pianist.

There's not a hair out of place in this meticulously planned recital, which shows just why this artist is still so compelling a singer, and on prime form...No disrespect to the singer is implied when I say that the piano sound is to die for. This must be one of the best Steinways ever, and it's superbly recorded...Not just Renee Fleming's many fans will be delighted.