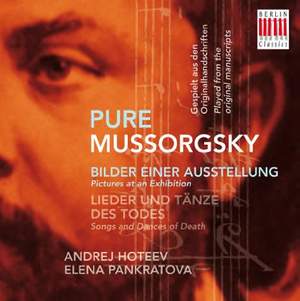 Mussorgsky: Songs and Dances of Death

March 2014 marked the 175th birthday of Modest Mussorgsky, yet to this day we have not heard his music as he actually wrote it. Well‐meaning colleagues and publishers who believed the compositions of the "brilliant amateur" contained many "mistakes" and clumsy turns and decided they were doing him a favour by improving them. Furthermore, flawed Russian reproductions of the composer's manuscripts in facsimile editions have over the years contributed to the number of mistakes. This fact remained long undiscovered because although the original manuscripts were kept in Russian libraries, access to them was and remains extremely difficult.

Since his discovery of the original, unadulterated score of Tchaikovsky's 3rd Piano Concerto, the Russian pianist Andrei Hoteev has made a name for himself as someone who goes to the heart of the matter. He therefore took an opportunity that that came out of the blue to view Mussorgsky's original scores and found just what he was looking for: both in "Pictures at an Exhibition" and "Songs and Dances of Death" he found numerous discrepancies compared with conventional sheet music editions (more than 60 such variations in each of the four songs alone) that really changed the very essence of the music.

The present recording of both works, which the pianist has recorded together with the Russian singer Elena Pankratova, finally unveils the unconventional, unspoilt music that the composer originally intended. The most important deviations are clearly documented with the use of illustrations from the manuscripts in the accompanying CD booklet.

One more point worth mentioning is the fact that the songs are sung in the keys Mussorgsky intended, and not transposed, as is so often the case; fortunately, Elena Pankratova has a wide vocal range that encompasses both the soprano and mezzo registers. Indeed, just recently, she received warm praise for her performances of The Dyer's wife in Richard Strauss's Die Frau ohne Schatten in Munich and as Turandot in Puccini's eponymous opera at the Mariinsky Theatre. These songs were written for a voice such as hers and they can be heard in this recording in the keys and with the requisite expression that such a versatile voice can produce, just as the composer intended.

Until now, the music of Musorgsky has not been heard as he composed it: well‐meaning colleagues and music publishers made what they saw as improvements and corrections which were compounded by faults in the reproduction of the manuscripts, leaving serious flaws in the scores. Andrei Hoteev has researched the original manuscripts and can now present this unconventional, unique music that the composer had in mind.