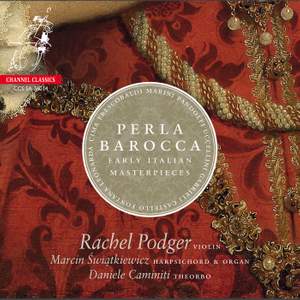 there's the sense of music in possession of a free spirit and keen to test boundaries both expressive and virtuosic...Predictably there's an unfailing eloquence to everything Podger does, whether... — BBC Music Magazine, December 2014, 5 out of 5 stars More…

Marini, B: Sonata 'per sonar con due corde'

Fresh from winning the Instrumental category in the BBC Music Magazine Awards 2014 for “Guardian Angel” (CCSSA35513) Rachel Podger is back with this beautiful collection of masterpieces of the early Italian Baroque.

By the mid-seventeenth century, musical composition had reached a point where invention had converged with technical mastery. Composers embraced a bass line lively with linearity, often entering into dialogue with the upper voices. Exploratory harmonic schemes were encompassed within larger unified tonalities. Through rhetorical structures, such as motive, imitation and sequence, composers instilled logic into their musical arguments.

These characteristics, though rooted in vocal practice, were being cultivated for the first time in musical history for instrumentalists. In other words, the Baroque was born.

The featured composers showcase sublime examples of the early Italian Baroque. Some composers dominate the repertory; others have left behind only a handful of works. Here, they come together to convey the diverse musical landscape at such an excitingly rich and creative era.

there's the sense of music in possession of a free spirit and keen to test boundaries both expressive and virtuosic...Predictably there's an unfailing eloquence to everything Podger does, whether scampering over the strings with irrepressible insouciance, tracing the airborne curve of a rhetorical flourish, or tucking in a discreet yet telling embellishment.

It would be hard to imagine a more enticing introduction to the delights of 17th-century Italian violin music...Podger and her accompanists enjoy bringing out these pieces' sense of discovery, of excitement and intense feeling, yet without doing violence to the substance of the music.