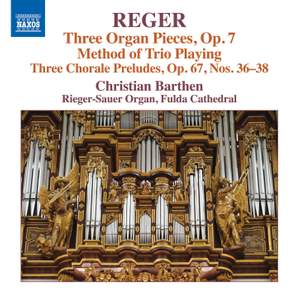 No. 1. Prelude and Fugue in C Major: Prelude

No. 1. Prelude and Fugue in C Major: Fugue

Reger’s status as the supreme German organ composer since J. S. Bach has never been seriously challenged, and this disc explores some of the inspiration that Reger found in his great model. Some of the earliest music here, such as the Three Organ Pieces, Op. 7, is thoroughly imbued with the spirit of Bach – though as yet it lacks the chromaticism that was to be a feature of Reger’s later writing. Together with his good friend and fellow organist Karl Straube, Reger wrote a sequence of inventions, based on Bach’s 1723 Two-Part Inventions that ingeniously cultivate complete independence between the three parts, to which they gave the title Method of Trio Playing. This is the final volume in the critically acclaimed 16 CD series of Max Reger’s complete organ works.