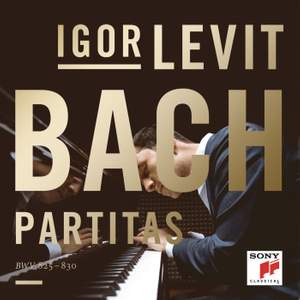 This is Bach at his most commanding...as fine a set of Bach's complete partitas as you will find in the catalogue, but it lacks the individuality which I had hoped for — BBC Music Magazine, Christmas 2014, 4 out of 5 stars More…

Igor Levit has recorded Bach's Partitas BWV 825-830. It is the second release by the 27-year-old pianist, whom many regard as the greatest talent of his time, on Sony Classical. With his debut album, featuring the late Beethoven sonatas, Levit received critical acclaim and awards from international publications and organisations.

After Beethoven, Levit now turns his attention to Bach:

"It's simply amazing what Bach could do!" Levit exclaims "He had a command of form second to none. Take the long slow movement of Partita no. 6: at the end it's not a sarabande any more, but a crazy, radical free fantasy – incredibly emotional, it stands no comparison. It really shakes you up. This is music of the utmost perfection!"

And of the minuet from Partita no. 5, BWV 829 Levit says: "this is a humorous piece, not a minuet! And then suddenly it is one. And then it isn't."

Igor Levit has worked his way meticulously towards the famous Bach partitas. He read, studied and played music that came before Bach. While he was pursuing his research, he didn't play Bach at all. And then he spent three or four years on the partitas without performing them in concert until he had the feeling he had finally mastered the scores and could do them justice.

In the intervening period since his first album was released, the young pianist has become more laid-back, and that is immediately apparent from a comparison of the two albums. When he recorded the Beethoven sonatas, Levit seemed to be hurling all his strength at the keyboard, battling the elements, as it were. In the Bach partitas, a relaxed distance can be felt; a happy calm that makes it easy for the pianist to enjoy performing the music to the full.

"For the first time in my life, I have the feeling that the way I play now is just right for me" he says. "Everything comes together, inwardly and programmatically. I can see light at the end of the tunnel, and that's where I want to go. Since then, I've felt immensely relaxed. It's true that I had to struggle with every note from the Bach just like with Beethoven – but this time I enjoyed the struggle."

This is Bach at his most commanding...as fine a set of Bach's complete partitas as you will find in the catalogue, but it lacks the individuality which I had hoped for

The distinction of this set of the Partitas...will establish him in the minds of many, I'm sure, as a major artist...Above all, they are fresh and joyous...Levit's achievement is to miss nothing of their scope and variety as compositions while conveying what it is that makes each one a unity, not an anthology, demanding to be performed complete...Levit doesn't miss a trick.

[Levit's] keen sense of enjoyment is very evident and fuels a performance that sounds consistently fresh and engaging…he’s alert to Bach’s abstruse whimsy in the tricky C minor Capriccio and elusive G major Tempo di Minuetto. He brings out the logic in the intricate counterpoint of the G major and E minor Gigues, maintaining both clarity of line and rhythmic panache. He’s sensitive to Bach’s poeticism, from anguished soul-searching in the E minor Sarabande to the dreamy enchantment of the D major Allemande...it works beautifully.

Hearing the six partitas played by the Russo-German pianist Igor Levit is a total and joyful experience. He skilfully varies the touch and colour of his masterful playing according to the varied character of these marvellous works. Authentic in the most profound meaning of the word.

Every note in these six Partitas crackles with life: this may not please lovers of "objective" Bach: the sound is bright and brilliant but can be hard, and some speeds are eccentric...What won me over is a rhythmic flexibility that reflects the structure of these wonderful movement.

These partitas, all six of them, are conceived individually by Levit as organic structures, with speeds held in judicious proportion...Ornamentation is crisp and apt; the artistry is of an order that amply reflects Bach’s own suggestion that these partitas are “for music lovers, to delight their senses”.

Ornamentation is sensitive and apt and, while this may be too ‘big-boned’ for some listeners (it is uncompromisingly ‘pianistic’), it is nevertheless a very impressive achievement.