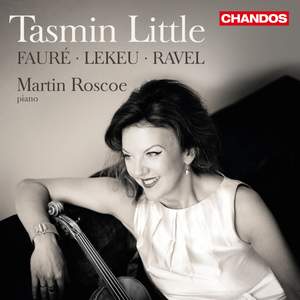 This is a typically well-constructed and enticing recital from Tasmin Little and Martin Roscoe. Guillaume Lekeu is one of the 'what ifs' of French music...The impassioned outer movements understandably... — BBC Music Magazine, February 2015, 4 out of 5 stars More…

She and pianist Martin Roscoe have enjoyed a long standing chamber music partnership. On this album they immerse themselves in music of three of the best late-nineteenth-century French composers: Gabriel Fauré, Guillaume Lekeu, and Maurice Ravel.

Written in 1875, shortly after his thirtieth birthday, the Sonata in A major by Gabriel Fauré has often been regarded as his first masterpiece. And despite having faced a daunting reception, it has become a reference in the romantic repertoire.

As the last arrival in the ‘Bande à Franck’, Guillaume Lekeu, in his twenty-fou-ryear-long life, wrote some fifty pieces of ‘tremulous emotion’, of which the Violin Sonata, of 1892 – 93, is by far the best known.

The opening movement of an unfinished early violin sonata by Ravel was not published until 1975, his centenary year, and the first known modern performance took place that year in New York. The movement convincingly unites different styles, from Fauré’s in the modal opening to Franckian chords in the development passage that leads back to the tune over chromatically descending triads à la Debussy, not to mention a second theme, over pulsing quavers, that clearly belongs to the Gounod / Massenet tradition.

This is a typically well-constructed and enticing recital from Tasmin Little and Martin Roscoe. Guillaume Lekeu is one of the 'what ifs' of French music...The impassioned outer movements understandably evoke the spirit of Franck's golden period, [Little and Roscoe] masterfully pacing the ebb and flow of the tension.

Tasmin Little and Martin Roscoe give a passionate, full-blooded performance of the Lekeu Sonata, taking on board the 22-year-old composer's lofty tone and high ambitions. Their approach is aided by a fine, generous recording.

The emotion of the work is evident from the first phrase, beautifully poised between expansiveness and forward motion as played by Little. It is captured in gloriously full sound, underpinning the Brahmsian quality of the piano writing...Little draws the loveliest of tones from her Guadagnini violin.