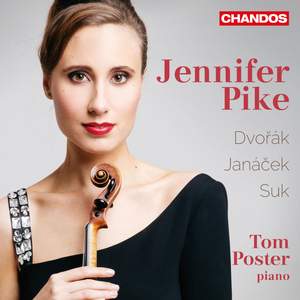 Since bursting onto the musical scene as a prodigiously talented youngster, Jennifer Pike has earned admirers the world over with her intelligent musicianship and dazzling technique. Her stunning recent recording of Sibelius’s Violin Concerto, described in The Mail on Sunday as an ‘auspicious entry into the big league’, confirmed her status as a truly outstanding soloist of the highest calibre. Here she is joined by her established duo partner Tom Poster in music for violin and piano by three great Czech composers.

Dvořák’s four Romantic Pieces, originally composed for string trio, are miniatures of beguiling simplicity and unselfconscious lyricism. The Nocturne in B major also started life in a different guise, this time as an abandoned movement from the String Quartet in E minor.

Josef Suk was a member of a generation of Czech composers who built on the foundations which Dvořák and Smetana had laid. His Four Pieces were something of a turning point in his output, widening his range of harmony and expression; they develop from the serious and dark qualities of the first, ‘Quasi ballata’, to the high spirits of the concluding ‘Burleska’.

The Violin Sonata is perhaps the first work that Janáček composed in his strikingly original mature style. Each movement is built from highly charged and intensely expressive melodic fragments. The Allegro recorded here was originally intended as the Sonata’s final movement but later replaced. The Romance and Dumka come from a much earlier period in the composer’s life but no doubt demonstrate a Slavonic spirit that was to remain with Janáček always.

She is particularly alluring in Dvorak's Romantic Pieces, by turns intimate, consoling and confiding - and always beautifully controlled...Pike and Poster make a great double-act...A fine recording and informative notes complete an enticing disc.