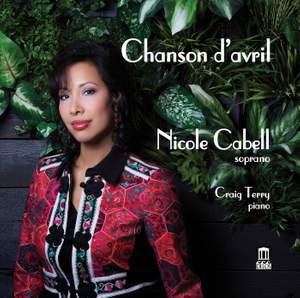 What was once a supple lyric voice is now heading towards the more muscular lirico-spinto territory and it's a shift fully exploited - at times a little too fully - here...Cabell's instrument... — Gramophone Magazine, November 2014 More…

Such praise is entirely typical of critical reaction to American soprano Nicole Cabell’s ravishing singing, whether from operatic, concert or recital stages worldwide. Indeed, this captivating artist has taken the classical world by storm since she won the BBC Cardiff Singer of the World award in 2005.

Drawn strongly to the French vocal repertoire, Nicole – in this, her first recording for Delos – explores the world of the chanson, and its direct descendant, the mélodie: France’s answer to the German Lied, or art song. Among the finest of mélodie composers are represented: Georges Bizet, Henri Duparc, Franz Liszt and Maurice Ravel. Nicole’s rich, silkysmooth voice and beautifully nuanced interpretations are supported with sensitivity and elegance by pianist Craig Terry.

“It’s a voice that wraps itself around you … long, sinuous phrasing, warm tone and a sophistication that touches everything she sings." The Times of London

What was once a supple lyric voice is now heading towards the more muscular lirico-spinto territory and it's a shift fully exploited - at times a little too fully - here...Cabell's instrument is only improving and gaining personality, while her musical choices are becoming more creative.

My main thoughts after playing through this recital disc concern the elevated consistency of performance Nicole Cabell brings to these nineteen songs. Her fluid tone is a sheer delight and she moves easily through her soprano range...Cabell has the rare ability firmly to engage the listener.