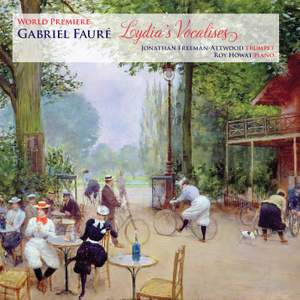 these vignettes are far from dry exercises: they embody the deceptively easygoing lyricism of Faur'e songs, making this an unexpected treasure-trove of his melodic invention. — BBC Music Magazine, November 2014, 4 out of 5 stars More…

This is the world-premiere recording of Fauré’s complete vocalises, a thirty-strong collection which has not seen the light of day in over a hundred years.

As a trumpet player and recording artist, Jonathan has attracted plaudits from the press; his producing career has resulted in over 200 albums and several awards including eight Gramophone Awards.

Jonathan broadcasts regularly for BBC Radio 3 and is in demand as an essayist for EMI, Warner, Deutsche Grammophon and other major record labels.

Written when Fauré was Director of the Paris Conservatoire, these exquisite vignettes find new life in this performance by a fellow Director, the Royal Academy of Music’s Principal, Jonathan Freeman-Attwood. Originally ordered by increasing technical challenge Jonathan instead orders the pieces by the music’s varied ‘affects’ and aptly places them in a context central to Fauré.

Jonathan is accompanied by pianist Roy Howat, who is uniquely qualified in this role, having edited the newly discovered vocalises with Emily Kilpatrick for publication in 2013.

these vignettes are far from dry exercises: they embody the deceptively easygoing lyricism of Faur'e songs, making this an unexpected treasure-trove of his melodic invention.

Freeman-Attwood has a warm timbre and he phrases the often simple melodic lines appealingly, catching their stylistic differences admirably. Both pianists give him sensitive support. The result is a most attractive anthology, naturally balanced and recorded.

This quirky but fascinating disc includes the premiere recordings of dozens of Gabriel Fauré’s Vocalises...The quirk is that the performer here is not a singer but a lyrical trumpet player, Jonathan Freeman-Attwood.