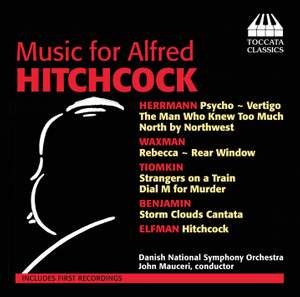 The concert recordings contain some ambient noises and quirks of balance (lots of bass tones). But the pluses are powerful: the orchestra's flair, the vivid colours and audible adrenalin. Even... — BBC Music Magazine, October 2014, 4 out of 5 stars More…

Herrmann, B: Overture (From "The Man Who Knew Too Much") [Arr. J, Mauceri]

Herrmann, B: Overture (From "North by Northwest")

Herrmann, B: A Narrative for String Orchestra (From "Psycho") [Arr. J. Mauceri]

Benjamin, A: Storm Clouds Cantata (From "The Man Who Knew Too Much") [Arr. B. Herrman]

Alfred Hitchcock commissioned his film scores from composers who were Hollywood’s master-craftsmen.

The concert items prepared from those scores feature a dazzling variety of styles, from Baroque and jazz to dark Romanticism and angular angst, all using the orchestra with breathtaking virtuosity.

The conductor John Mauceri, as at home with this repertoire as any other musician, has prepared a number of concert suites from the film scores and some of them receive their first recordings here.

This recording was made live in concert in Danish Radio’s new concert hall in Copenhagen.

The booklet contains an introductory text by John Mauceri and an extensive, illustrated essay on Hitchcock and his use of film music and work with composers by British film-music historian John Riley.

The concert recordings contain some ambient noises and quirks of balance (lots of bass tones). But the pluses are powerful: the orchestra's flair, the vivid colours and audible adrenalin. Even the most dedicated film buff should deepen their appreciation as Hitchkock's composers run the gamut

Hitchcock was the enabler of many hours of orchestral music that are part of the 20th century’s legacy. Herrmann’s scores for Vertigo and Psycho, and Franz Waxman’s for Rear Window, stand out...the Wagnerian Scène d’Amour, from Vertigo, comes over as one of the great slow movements.