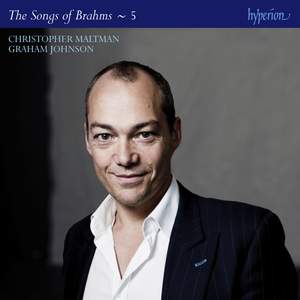 A new recording from renowned recitalist and winner of the Lieder Prize at the 1997 Cardiff Singer of the World Competition, Christopher Maltman. Graham Johnson is both accompanist and curator of this series that presents the entire piano-accompanied songs and vocal works of Johannes Brahms.

As such it is a companion to the series undertaken by Hyperion for the songs of Schubert, Schumann, Fauré, Strauss and Liszt. This fifth volume presents the songs of Op 33, the only time that Brahms composed a song cycle as such, but even then his observations about how he wished his songs to be heard are worth considering; they are far removed from the contemporary orthodoxy. Brahms sets Tieck’s ‘novella’ Die wundersame Liebesgeschichte der schönen Magelone und des Grafen Peter von Provence (‘The wondrous love story of the beautiful Magelone and Count Peter of Provence’). A full account of the text and of the composition of this intriguing cycle is to be found in Graham Johnson’s erudite booklet notes.

The partnership of Graham Johnson - who, as ever, provides the lucid liner-notes - and Christopher Maltman would be hard to better. They sound well and their performance is beautifully shaped in its ebb and flow, an important consideration in any song cycle. Maltman colours his voice skilfully as he represents the different protagonists in the story.

While Behle and Bjelland attempt contextualisation [on their Capriccio recording ealier this year], Maltman and Johnson give us the music on its own, in a performance that is the more focused and emotionally detailed of the two, though some may prefer Behle’s romantic-sounding tenor to Maltman’s sexier, if more troubling baritone.